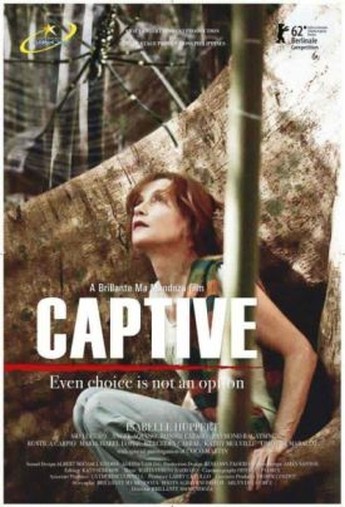 This is kinda based on an actual kidnapping which took place in the southern Philippines, when Muslim forces fighting for independence snatched 20 hostages from a resort. They were then held captive for more than a year, being marched through the jungles, while some were ransomed, and surviving both their captors and the efforts of the government to rescue them, before eventually being freed. It focuses, on the hostage side, on aid worker Therese Bourgoine (Huppert) – and that’s where the “kinda” aspect comes in, because no such person was among the victims – and on the two rebel leaders, initially Abu Saiyed (Bagatsing) and then after he is taken out of the picture, his considerably more vicious replacement, Abu Mokhif (Lucero). Over the course of the 12 months, relationships between captors and captives go from troubled, almost to cordial, and back again, with unnerving speed. Stockholm syndrome is entirely real, it would appear, though can take forms more subtle than going full Patty Hearst, such as simple acts of human kindness.

Mendoza adopts a very naturalistic approach to proceedings; it feels almost like there’s a documentary crew embedded with the insurgents, rather than any kind of dramatic structure, and I wonder how much of what unfolds was improvised. There’s little or no music, and the camera seems to react to the action, rather than leading it. The film also has a (deliberate?) absence of time: we see both sides learning of the 9/11 attacks, with obviously differing reactions, but otherwise, you’re left to try and figure out the passage of time from external clues, such as an ongoing pregnancy. As an aside, there’s also some surprisingly graphic birth footage, that appears to have strayed in from a roadhouse film like Mom and Dad. Still, it’s surprisingly engrossing, with a real sense of verite, and captures how awful it must be to live in a state of permanent tension, for months on end. Huppert comes across as utterly unglamourous, especially given a shoot which can hardly have been a vat of chocolate, and we’ve certainly crossed the Philippines off our list of potential holiday destinations.