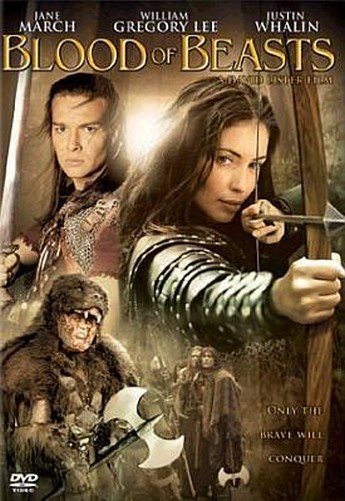 Despite a cover clearly designed to invoke Lord of the Rings, this is a straightforward telling of Beauty and the Beast in a Viking setting, with Wagnerian overtones. A clan sets sail to defeat a monster living on a nearby island, but their chief is captured. His daughter, Freya (March), swaps herself for her father, and discovers the beast (Dukas) is the victim of a divine curse, inflicted on him by Odin. However, Sven (Lee) sees his chance to get both chiefdom and daughter, though it takes embarrassment by a plucky lieutenant, before he decides to sail back to face the beast and rescue Freya. [He otherwise seems happy to wait for the current chief to die – a safer, somehow less Vikingy approach to the transfer of power] Naturally, turns out that the beast has a connection to Freya’s past, though I am being much more subtle about this than the movie, which is so blatant as to make the heroine look like an idiot for not making the connection.

Elements here certainly qualify as awful. Some hairstyles, for example (not least Sven’s) are about as bogus as imaginable. Ditto the perfect teeth – and whoever knew the Vikings had bikinis? Add some really bad digital fire FX and, especially in the first half, this teeters on the edge of gurgling down the drain entirely. However, it still has heart, Dukas projecting tragic heroism from inside his (quite effective) costume, which is by no means an embarrassment. March is also solid and, given I’d only seen her before in The Lover + The Color of Night, unexpectedly keeps her kit on. The ending, while somewhat contrived, is a dark twist on the usual Disneyfied concept, and fits the setting nicely. It’s just a shame more thought and/or money wasn’t put into the earlier portion.