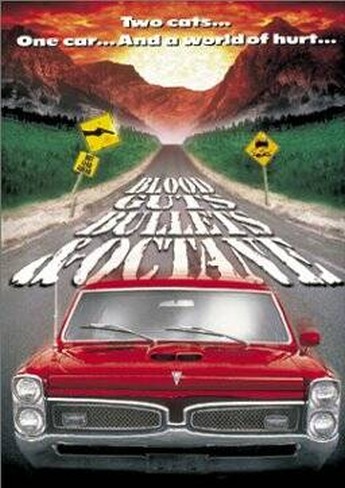 The myth surrounding the film is that it was made for less than $10,000, which conveniently forgets a) that Carnahan’s day job gave him free access to a lot of equipment, and b) the hundred grand ponied up by the distributors in post-production to make a viewable print. It’d certainly be easy – and perhaps justifiable – to mark Carnahan down as no more than a sad Tarantino wannabe. You’ve got pop-culture dialogue, a fractured structure concealing an underwritten storyline, even a notoriously loudmouth director inserting himself as an actor. But for the most part, Carnahan shows enough restraint to stay just this side of irritating.

It’s about two used-car salesman (Carnahan and Leis), whose business is teetering on the edge of failure when they are given an offer that seems too good to be true: look after a car for two days, and earn $250,000. From this spirals a story of…well, the title pretty much sums it up. The dialogue is blisteringly fast, in the style of David Mamet, which helps paper over chunks when not much is actually happening. The characters are likeable and interesting, with Leis having particular depth – you feel he’s in the wrong career entirely, still possessing the spark of humanity which is anathema to his colleague. Credit is also due for the concept of what makes the car so valuable, which I defy anyone to see coming. If it’s all somewhat a triumph of style (and marketing!) over substance, with the small budget often painfully obvious, it still contains enough meat to merit your attention, both in itself and for Carnahan’s future.