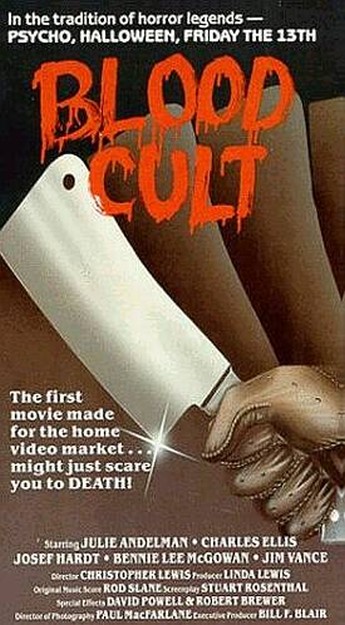 If this was indeed the first “made for the home video market” film, it’s hardly an auspicious start for the medium. Though deserving some credit for boldly going where no movie had gone before, it’s clear that video and, particularly, audio technology have made vast leaps forward since 1985. These particularly wretched aspects are what condemn this more than anything else, since the story and acting are functional; nothing special, but largely adequate to the task at hand. Someone is murdering Oklahoma co-eds, and with elections looming, the local sherriff (Ellis) must find out who; thanks to the killer conveniently leaving talismans at the scene, he suspects a satanic cult. Either that or Dungeons & Dragons fans, I kid you not.

The cast are “homely”, shall we say – either Lewis was deliberately going counter to the Hollywood look of actors and actresses, or perhaps they just breed them for size rather than quality in Tulsa. The daughter and her boyfriend are particularly ugly, though she is not helped by some hideous 80’s hair and fashions. Still, Ellis is kinda endearing, and by the end, I was somewhat attached to his character, especially when it looked as if the film was going to drift into Wicker Man territory. It’s surprisingly restrained, with no nudity, and less blood than I expected – the vast majority of this would be little more than PG-rated these days. Like the first in any area, it’s unquestionably rough around the edges, yet I can’t help grudgingly respecting its pioneer spirit.