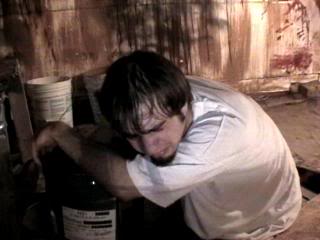 This is, very obviously, a shameless rip-off from Saw: our hero (Schwartz) wakes to find himself trapped in a small room, while a largely-unseen, masked psychopath taunts him and forces him to undergo various tests and trials, with freedom as a lure. Despite such a blatant lack of originality, the result works well; it takes the best idea from Saw and runs with this, rather than diluting the concept by trying to expand outside the room, as the inspiration did, with disappointing results. This keeps the claustrophobia dialed up, and also makes the limitations of budget, location and technology seem less obvious, which is always a wise move in microbudget cinema.

It’s not perfect, by any means. Elements of the script don’t ring true, such as the infernal prison actually being inside the hero’s “vacation home”: I doubt he’s old enough to buy alcohol, never mind a second residence. There is also a subplot involving his girlfriend, which doesn’t go anywhere – it could have been excised, but as the film runs only 52 minutes, even including this, I can see why everything but the kitchen-sink was left in. This may also explain the odd tempo, with little sign of how much time has passed – this results in the hero apparently going from regaining consciousness to near-hysteria in about five minutes, far too quickly to be effective. Still, the main strength is an interesting script which has had some thought put into it. For what is basically a one-man piece of work, it’s a credible effort, and I’m prepared to cut Schwartz slack for his plagiarism – just this once.