This is what you get, when you order your nordic noir movie on Wish. Something which has the shape of a Scandicrime film, yet there’s something just a shade off about the execution. To an extent, I am quite surprised this slice of Sino noir even exists at all, since it doesn’t exactly depict urban life in the People’s Republic in a glowing, “We Are Little Red Guards Full of Pep and Vigor” way. The central characters are detectives Xing Min (Huang) and Lao Zhou (Zie), who are investigating a series of murders. The victims are mostly prostitutes, wearing red dresses, who have been drained of blood. Lao is a veteran cp[, on the edge of retirement, but comes in to help after noting a resemblance to unsolved crimes from fifteen years ago. 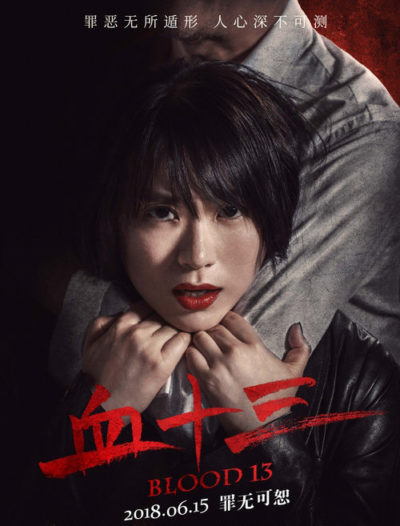 Lao has been plagued by his inability to catch the killer – to the extent, he carries the skull of one victim around with him, as a constant reminder of his failure.  As you do. This causes a bit of grief when he tries to go through airport security with it (pro-tip: maybe take the train next time?). At least that gives him a character trait, even if it’s not much more than the “shabby veteran detective, haunted by a case from his past” trope. It’s still more than Xing gets. She is competent enough, yet there’s almost nothing about her private life or character revealed over the course of proceedings. There’s a station workmate (Li) with a crush on her. That’s about the extent of it.

The early stages are mostly spent crossing off a few red-herring suspects, e.g. the high-ranking official who just happened to lend one of the victims a large sum of money. Eventually, the focus of the investigation comes onto Ke Zhenghua (Qian), a taxi driver who works nights and cares for his paralyzed wife during the day. The film shifts at this point from being a “whodunnit”, because there’s no doubt Ke is the culprit. It becomes a “can-they-prove-he-dunnit” for a bit, then Xing takes matters into her own hands, apparently by hanging round on the streets (top), waiting for Ke to take the bait. Probably surprisingly, this works.

It’s definitely grimier than the typical Chinese movie, largely operating after dark, in a sordid underbelly of low-rant massage parlours, whose clients run the gamut from creepy on down. I guess even communism can’t do anything much in regard to human nature and its baser needs. However, as such things go, it remains rather too tasteful, with not much that would go beyond a PG rating. It only ever reaches a moderate level of violence, and forget entirely about sex and nudity, despite the potentially exploitative nature of the subject matter. I can imagine this one made thirty years ago in Hong Kong, probably with Anthony Wong as the taxi driver. It would likely have been better, and certainly more entertaining.