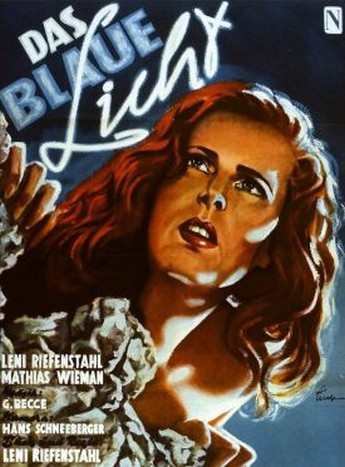 Riefenstahl’s reputation pretty much got fucked by her work for Adolf Hitler, most infamously immortalizing the 1936 Olympics in Triumph of the Will. But to label her as simply a Nazi collaborator would be doing her a disservice. This 1932 film, for example, was a critical and commercial success outside her native Germany, and it’s also worth noting the film was actually written by two Jews, Bela Balazs and Carl Mayer [though their names were 1984’d off the credits when it was re-released after Hitler took over]. With a needless wraparound of a modern-day couple arriving at a rural inn, it tells the legend of Junta (Riefenstahl), a goat-herder who lives in the Dolomite mountains near the small village of Santa Maria. The locals are troubled by the slew of accidents that have befallen their young men, who are lured up the crags to their doom by a mysterious light seen emanating from the peak, and increasingly, blame the wild, untamed Junta for this. A painter, Vigo (Wieman), visiting the town, meets and falls for Junta, despite the language barrier which separates them, and moves in to her Alpine abode. However, his discovery of the true cause behind the light, opens the way to tragedy.

There’s more than a hint of apparent inspiration for Manon des Source here, with an outsider falling for a feral local beauty, against the lushly-shot backdrop of a battle for natural resources. Particularly in the second half, it’s almost a silent film, and seems to draw as much from German expressionism as modern sound cinema – by which I mean, there are frequent close-up of people’s expressions, as they react to something. This frankly, is an approach which has not aged well, and stays well beyond its welcome, despite the lovely scenery. [Come to the lovely Dolomites! Climb our mountains! And die!] The second half is more action-oriented, and that has stood the test of time much better, with the beauty accompanied by a genuime sense of danger: that’s Riefenstahl, then thirty years old, free-climbing up an apparently vertical cliff-face, with no obvious equipment or ropes. Damn. While her later work certainly has grounds for concern (to put it mildly!), there are moments, albeit sporadically, that are as good as anything else of the era, and deserve to be appreciated as such.