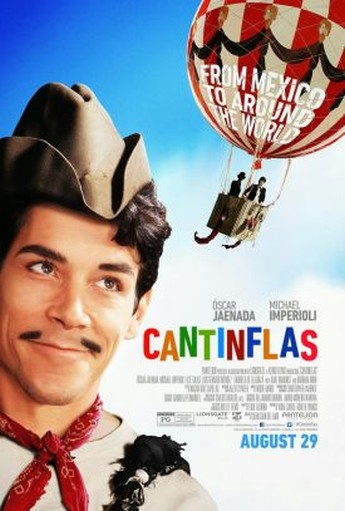 Cantinflas = David Niven’s man-servant in Around the World in 80 Days. There. That’s more or less all I knew about the guy, going into this. Well, I was aware he was a Hispanic icon of the fifties and sixties, a Mexican everyman/folk hero, but that was it. Outside of 80 Days, I had not seen any of his work. And now, after this biopic of him? Well, I’m perhaps not enormously better educated. Oh, I do have a greater awareness of a background that included failed attempts at boxing and bullfighting, before eventually finding his niche as a comedian in the Mexican “tent shows” – their equivalent of music hall – and rising to become an icon of the screen. Watching his rise is fun, and he makes for an engaging hero, but in terms of his appeal, I can probably see why his foray into Hollywood was short-lived, His style seems highly verbal (think something along the lines of Groucho Marx), and difficult to translate into English: the subtitles here make a brave effort, but I’m certain much was lost in the process.

As well as telling his story, it’s also the struggle of 80 Days‘ producer, Michael Todd (Imperioli), to get the film made. He comes off as a “smoke and mirrors” snake-oil salesman, telling Actor A that Actor B was already on board, then telling Actor B that Actor A has committed – and these were top-name stars, like Elizabeth Taylor and Frank Sinatra. It’s interesting to see just how far he got, with little more than a script and persistent determination. But, of course, it’s only when Cantinflas – apparently taking a break from rescuing the cinema industry in Mexico from state-sponsored corrupt unions and practices – shows up, that the pieces come together. It’s typical of an approach that seems to border too much on hagiography to be credible, with the only sign of a crack in the Cantinflas facade coming when we see him going into his dressing room, where a pair of young women are sitting expectantly. We then move rapidly on. More of that, and less of the political shenanigans, would have been welcome.