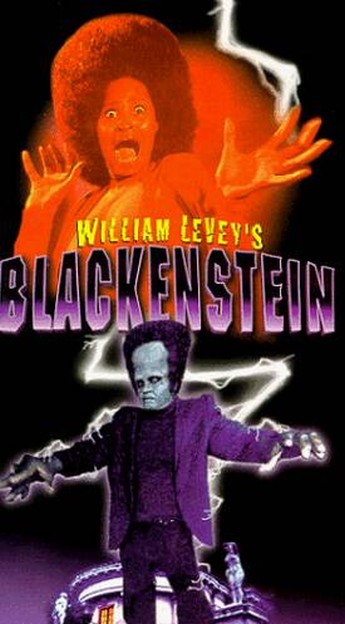 There’s definitely scope for a blaxploitation version of the Frankenstein story – I imagine the monster with gold chains, driving a 1972 El-D, sticking it to “the man”. [And that’s from someone who’s so white, he borders on transparent.] This manages, with extreme care, to avoid anything so amusing – and, indeed, unlike Blacula, any entertainment value is purely from hurling mockery at the screen. Dr. Winifred Walker’s boyfriend Eddie was left limbless by a Vietnam land-mine – though when he’s being taken out of the ambulance, clearly has feet! – so she calls on Dr. Stein [oh, please…] to help. He, you see, won the Nobel Peace Prize for cracking the DNA genetic code. Yes, Peace Prize. Probably explains why he’s such a crap doctor – that, and the way the illumination in his lab is of the “underpowered nightlight” variety. [Though the sets there are the same ones used in the 1931 version]

Needless to say, it all goes horribly wrong, and Eddie escapes, though where he gets his ultra shiny shoes remains a mystery. He goes on a very slow rampage, picking his female victims from those unable to escape by slowly strolling away. This is interrupted only by a lengthy, entirely pointless segment in a nightclub, where we are “treated” to a very poor stand-up routine by comic Andy C, which makes you yearn for another interminable sequence of the monster shambling about. Inevitably, he returns to his maker’s mansion, where we see the creation is immune to bullets. So how can he be killed? I’ll tell you, since if it isn’t already clear, DO NOT WATCH THIS FILM. The answer is: police dogs.

This probably makes no more sense to you than it did to me. But very little in the film does, and it’s surely an all-time worst – in editing, acting, writing and even music, any competence appears to be purely accidental. This goes beyond bad, beyond so-bad-it’s-good, and into territory rarely traversed. If you still have any interest in seeing this, I have failed in my task as a reviewer. Proceed At Own Risk.