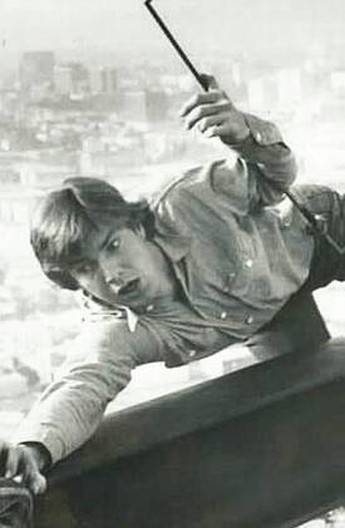 You know a film is not new, when Max Von Sydow doesn’t look old. Hell, even Dennis Quaid looks barely out of short pants, playing psychic Alex Gardner, who gets lured into a program headed by Dr. Novotny (Von Sydow). He’s trying to get into people’s dreams, in order to handle their nightmares; the potential (ab)uses aren’t lost on Bob Blair (Plummer), a government spook with an agenda, a psychic assassin in his pocket, and easy access to a President with nightmares. If you can’t already tell where this is going to end up, let me spell it out: in the president’s head, with Alex battling his evil counterpart.

This starts and finishes in fine style, with Alex refreshingly smart-ass. The sequence where he invades the dream of a lab assistant (Capshaw) has acquired particular ambivalence in the years since, and hardly counts as typically heroic behaviour. The finale is fabulous; a lurid dreamscape through which Alex and the President must precariously make their way. Sometimes, films of this era now seem cheap and tacky (The Golden Child), but effects-wise, this has stood the test of time well, though the dream setting helps. It’s the middle which is weak; once the premise is established, the film grinds to a directionless halt – you may want to join the characters in their slumbers. Well, until the snake-man appears, anyway…