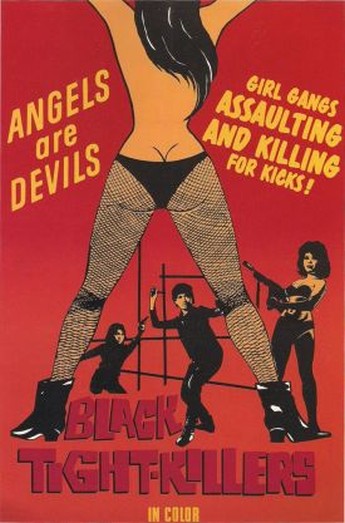 Well, it’s certainly unique. War photographer Honda (Kobayashi), on his way home from Vietnam, hooks up with trolley-dolly Yuriko (Matsubara), only for her to be kidnapped from under his nose, after he gets involved in a fight with several females, clad in the titular dark attire. Framed for murder, he gets out of custody with the help of journalist friend, Bill Sommers, and investigates. He discovers that, during the last days of World War II, Yuriko’s deceased father hid a large stash of gold, and word on the street is, its location is to be found among his possessions. Two groups – a gang of criminals with Western connections, and an all-girl gang who are go-go dancers by day – are now hot on the trail of the loot, and with Yuriko believed to hold the key to finding the treasure, possessing her is a big step forward for either group. Honda ends up throwing his lot in with the more attractive set, and the race is on to the island which is the gold’s location.

This 1966 film is long on style, and also on questionable plot points. For example, it’s nice that a journalist can meander into a Japanese police interrogation room, and get a suspect released with a couple of sentences – especially when later events show that this act is actually entirely counter-productive. Similarly, it’s nice Honda has a ninja mentor, who can provide him with everything from laughing gas to a medieval ninja bazoooka; however, why does he lug the latter around (in its nifty carrying-case) for ages, before shooting at the helicopter from which he is taking fire? There’s really only so far exuberant style can take you, even when it’s elegant dream sequences, colour co-ordinated rear-projection driving scenes or scenes knocked-off from Bond movies. I was eventually worn down by the realization the creators appear to be too busy being “cool” to bother with trivial things such as plot logic: if you can handle that, you’ll probably love this. But then, you’re probably also an annoying hipster in a beret.