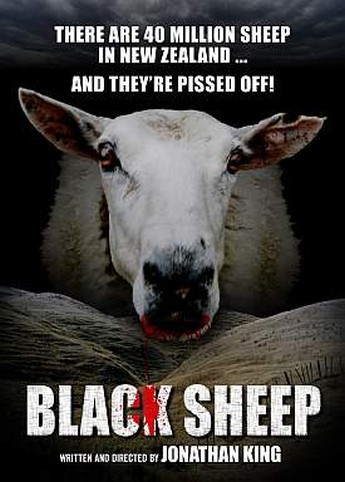 A traumatic incident leaves Harry (Chamberlain) with a phobia of sheep – unfortunate, since he lives on a sheep farm. 15 years later, he heads back to the family home, to sell his share to brother Angus (Feeney), who has been running things in the meantime. What Harry doesn’t know – and neither do the two animal-rights activits who are roaming the property – is that Angus has also instigated hellish genetic engineering experiments, involving adding human DNA to sheep. The results are ugly, hungry and not at all the docile fluffy animals you’d expect: their bite also transfers the contagion to their victim. Even if the tagline (right) is somewhat inaccurate, since the ‘pissed-off’ ones are only one farm, it was a big success in its home-country, where it became the top-grossing domestic horror film of all time. Probably no surprise, since sheep outnumber humans ten-to-one there. Well, if you discount visiting film crews: while as photogenic as ever, I kept expecting a Fellowship to come riding across the green, majestic countryside of NZ.

It’s clear where this is aiming, somewhere between the early works of Peter Jackson and Shaun of the Dead. While such lofty goals are laudable, it makes the movie’s failings all the more painful and obvious: King lacks the excess of Jackson, the wit of Shaun and the imagination of either. What you have here, albeit with a fair amount of gore [the FX being courtesy of Weta], is sheep killing people, alternating with people killing sheep, and it’s not really enough to sustain interest for ninety minutes, despite the lovely concept. The characters are nothing too special either: you have your basic stereotypes, from mad scientist through to loony environmentalist and, while they do the job, you don’t feel vested in their survival, or any particular interest in spending time with them. It’s not awful, and I’ll cut it some slack for novelty and an inventive way of finally disposing of the problem. However, I recall a British film from 1991, The Revenge of Billy the Kid, that covered similar bovine-human territory, so King isn’t as original as he thinks.