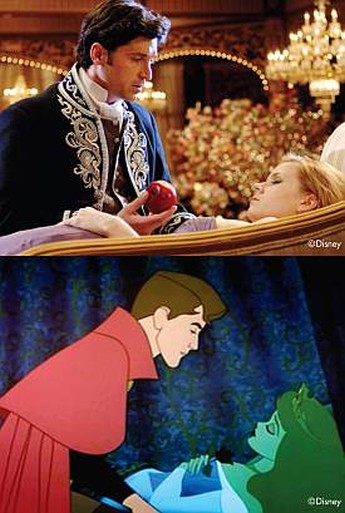 Part parody of, part homage to Disney musicals, this has Giselle (Adams), an animated princess, cast into modern-day (and live-action) New York by an evil stepmother, where she encounters divorce lawyer Robert Philip (Dempsey)), whose view of love is rather less romantic than Giselle’s, to say the least. His girlfriend is unimpressed to find this interestingly-costumed competitor in Robert’s apartment, and while Giselle’s fiancee from fairy-tale land (Marsden) has also journeyed to New York to save her, so has a minion (Spall) of the evil stepmother. His intentions are rather less honourable, and rather more poison-apple based, shall we say. Will he succeed in his mission? Oh, who am I trying to kid? As noted, this doesn’t so much twist the tropes of traditional Disney, as simply use them in a contemporary setting: as satire goes, it’s about as edgy and hard-hitting as a packet of marshmallows. If you can’t predict exactly where this is going within ten minutes of Giselle’s arrival in New York, you haven’t been paying any attention to the studio’s output over the past seventy-odd years.

That said, it’s still a surprising amount of fun, and much of the credit for that goes to Adams, who is a Disney princess made flesh – literally, from the moment in the morning when she wakes up, and stretches in the way only princesses ever do. The film is at its wittiest when contrasting the ‘happy ever after’ mentality of Disney, where minutes together are all that are necessary for love to blossom, with the rather different realities of modern life. However, it never has the courage to give the hand that feeds it [this still being a Disney movie] the mauling it deserves, and ends up reverentially rolling out many of the same cliches. The sheer blizzard of references to other movies is a nice bonus, and they’re subtle enough that you won’t be distracted, and even the hardened film-buff will likely miss some; Robert’s law-firm, Churchill, Harline and Smith, is named after the three song-writers for Snow White, for instance. A good deal more fun than I expected this would be, I have to admit.