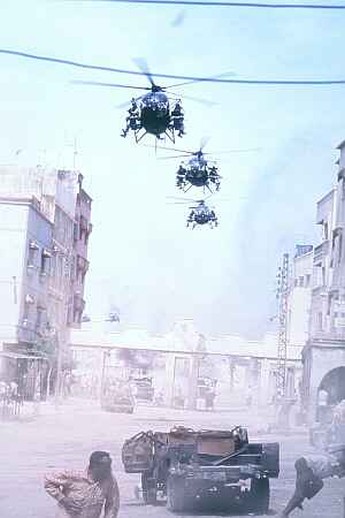 The impact of this film can be replicated by going into a closet, closing the door and beating yourself over the head for two hours, with a sign reading “War is bad”. There’s no character development beyond the cringeworthy: you just know when a soldier leaves a message on his wife’s answering machine, that he’s going to die horribly – and yes, he does. That’s the level at which this operates; it takes forty minutes for the action to start, but Scott wastes the time and opportunity. Part of the problem is there are too many characters, and they have few distinguishing features (seen one square-jawed, heroic grunt, you seen ’em all); I may be being parochial, but the two Ewans from Trainspotting, McGregor and Bremner, were rare exceptions.

There’s no doubt some of the action sequences are well-handled, but the overall effect of the deaths is no more than a video-game, since you don’t really give a damn; you want to push the “skip” button and get right on with the next slab of carnage. And the hypocrisy on view here is just horrible: Americans go abroad, kill hundreds of foreigners, and become the heroes in a Hollywood action movie. Foreigners come here, kill hundreds of Americans and…oh, sorry: they’re terrorists, aren’t they? Yuk.