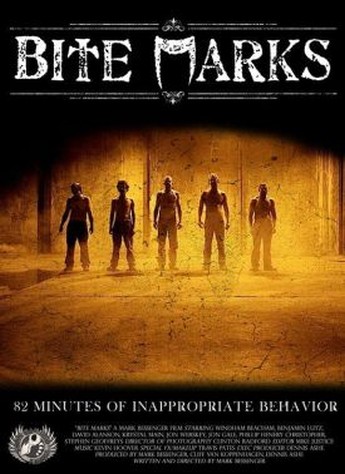 “Gay” in both sexual orientation and South Park senses of the word, this is about a stereotypical bickering couple (Beacham and Alansonh), who hitch a ride with a stereotypical truck driver (Lutz), delivering coffins to a funeral home. The truck breaks down in a remote junkyard, and the trio discover that the coffin contains a vampire (Main), that’s out to get them, as well as anyone else in the vicinity. The good news is, they are armed with a copious knowledge of vampire lore. The bad news? It’s all from movies, and might not be entirely accurate when applied to the real thing.

That side of things is actually kinda fun, as they have to work out on the fly which of the traditional rules are in play here: it’s a mix of some elements you know (holy water) and others that are new, which I won’t spoil. Some amusement is to be found in the presence of Stephen Geoffreys, Evil Ed from the original Fright Night. Taking a break from his main career of gay porn (I’m not making this up; his IMDB filmography includes titles such as Mechanics bi Day, Lube Job bi Night), he gets to deliver one of his signature lines from his most famous work. And I’m not talking Guys Who Crave Big Cocks.

Less successful is… Well, just about everything else: predicatable plotting and pacing which drags horribly in the opening half-hour. I don’t think it makes me homophobic to say I could have done without seeing the couple banging in a bathroom stall, or the truck driver being – surprise! – a closet homosexual. These elements are so clunkily added to proceedings, as to ghettoize the film entirely. However, taking shallow, irritating characters, who would severely hamper any film, and making them gay, is not exactly what you’d call a solution.

I was not surprised in the slightest to discover that the couple were originally boy/girl, but were changed at the behest of the executive producer; doing such things for purely commercial reasons is rarely a good idea. Credit is due here for minor details, e.g. referring to an attack by a pack of vampires as a “fang bang,” and also finding a somewhat creative excuse for that old chestnut, the cell-phone, and why it can’t be used. However, in the end, whether gay, straight or anywhere in the middle, a bad horror movie is a bad horror movie, and that’s basically what you have here.