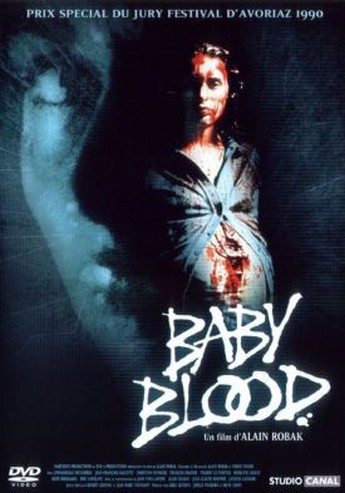 A new leopard is delivered to the Circus Lohman, carrying a parasitic, intelligent creature within it, that has decided it’s time to take the next step in its evolution. Bursting out of the animal, it takes up residence inside Yanka (Escourrou), a performer and main squeeze of the owner, making her appear to be pregnant. Fed up of his abuse, Yanka heads for the not-so-bright lights of Paris, but the creature growing inside her body needs to be fed, and an extra helping of fries won’t cut it. The foetus – or whatever it might be – requires human blood to grow, and orders Yanka to kill in order to provide this. Initially resistant, Yanka even tries to kill herself, rather than commit murder, but eventually discovers that there’s more than enough male scum whose loss would not be mourned by society. This isn’t really solving the main problem, so much as putting it off; for what’s going to happen when the creature has grown too large, and can no longer be contained within Yanka’s belly?

Rumour has it Gary Oldman allegedly did the voice of the foetus for the English dub, but I’ve not been able to find any verifiable confirmation of this, beyond a second-hand reference to this in a Fangoria review. It’s loopy enough to be plausible, but I couldn’t honestly claim it sounded like Oldman, so it may simply be an urban legend. That aside, what’s here is engagingly fun, and would make a fine double-bill with L’Interieur, of French pregnancy horror. This is low-budget stuff, with echoes of Cat People, Brain Damage, Driller Killer and early Cronenberg, which is an odd combination, to say the least. Robak brings a gleeful air to the gore, especially as things proceed and the film shifts from a psychological aspect to more in your face. Perhaps it might have been interesting if there’s been more doubt over Yanka’s mental status: is she simply a psycho preggo? Still, what you have here is an entertaining piece of schlock, which sets things up nicely for Baby Blood 2, whose poster can be seen at one point.