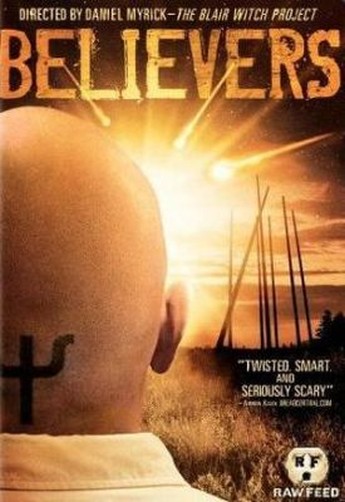 Paramedics David (Messner) and Vic (Huertas) are called to an incident where a woman has collapsed. But while tending to her, they are abducted by a group of men with guns, who take them, along with the woman and her daughter, back to a remote compound. They are part of a cult group called Quanta, who operate under the guidance of a man known as the Leader (Benzali). The core of their philosophy is a mathematical formula which they believe predicts the imminent end of all life on Earth, and they are preparing to ‘transcend’ their bodies so that they can become the seed for a new version of humanity, after the apocalypse has passed. David, an avowed atheist, snorts derisively, even as the Leader reveals thing about him that shouldn’t be known. Vic, however, is a lapsed Catholic, who has major issues of faith, and the message of the Leader finds more fertile soil there. As the hours tick down towards the group’s final plan, it’s up to David to try and escape from the group, or for his paramedic colleagues to track down what happened to the pair.

This is badly flawed on a number of levels, not least with an ending which is so obviously telegraphed, it fails to provide any of the shock which was clearly intended. There are several gaps in logic, such as the original call being apparently made by a cult sympathizer; why they’d do so, is unclear, since it becomes apparent subsequently that the presence of the paramedics is a nuisance. The biggest flaw, however, is that there’s absolutely no insight into why people would follow the leader. If you’re going to portray a cult – and have one of the central characters recruited into joining it – there needs to be a great deal more effort put into explaining why this would happen, rather than “I get to have sex? Cool. Sign me up for the mass suicide!” Here, the Leader is so entirely charisma-free, the net result is like a Doomsday cult run after school by your least-favourite maths teacher. You’d likely be praying for the end of the world, simply to get him to shut up, in this over-stretched Twilight Zone episode.