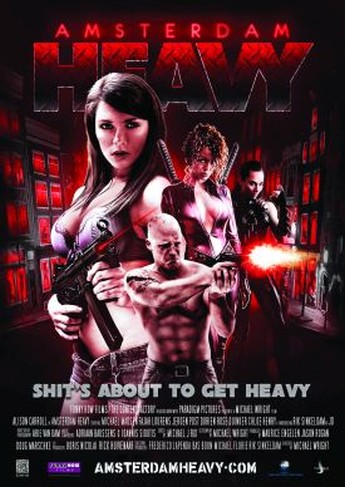 Busting out of a cargo container at Amsterdam airport comes a man (Sinkeldam) with no idea who he is, only fractured memories of his past, JD tattoed on his knuckles, what appears to be a phone-number crudely carved into his arm. When he reaches the city, he calls the number and finds it belongs to stripper Monique (Carroll). But, as she says, “I’m not just a stripper – I’m a stripper with guns.” Together, they try to piece together JD’s past, and find out that he was previously part of a drug-running syndicate. He was sent by his partner Gunter (Post) to Bangkok to finalize a deal with their Thai connection, Nong (Schnorr), only for it to be a double-cross, with JD left near-dead, and with his mind scrambled like a well-beaten egg, before he manages to crawl into the cargo container mentioned previously. Needless to say, neither Gunter nor Nong are exactly happy to discover him still breathing, and aim to rectify this oversight as quickly as possible.

As a small-budget actioner, it’s okay. Mostly filmed around the Amsterdam red-light district, it includes some goofy delights such as a gunfight between men on bicycles: only in the Netherlands… You get the feeling Sinkeldam is aiming for a low-rent version of Jason Statham, charging around between one fight sequence and the next, and there are some potentially interesting nods to “girls with guns”, such as Gunter’s pair of female enforcers. However, the way the action sequences have been filmed and edited is dreadful, with the camera pushed in too close and the shots so short as to destroy any sense of skill in the participants (and since some are genuine MMA practitioners, that isn’t in much doubt), and largely obscure what the hell is going on. You just have to wait for them to be over, and see who won. With some of the cast, there is also the whole “English as a second language” thing, though this affects some (Gunter) more than others (JD). The time passed, the movie finished without tying up its loose ends, and we went on with our lives.