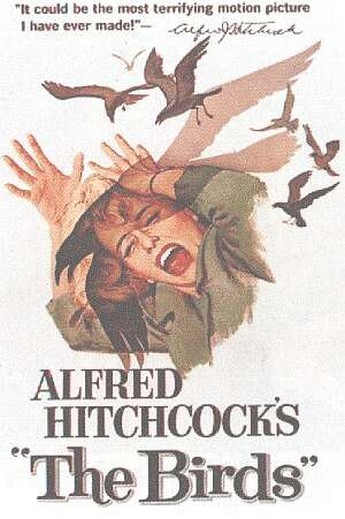 Received wisdom says this is a classic – the 40th anniversary of its release (28th March, 1963) seems a good point to take a look and see how it stands the test of time. Despite some great scenes, the answer is probably not well, compared to Hitch’s other work: too much padding and not enough meat. This starts right from the beginning, with a convoluted plot to bring heroine Melanie Daniels (Hedren) to Bodega Bay, involving driving up the coast to deliver cage birds to a man she doesn’t actually like much. This, and a bunch of sexual tension that goes nowhere, largely occupies the first half of the movie. Of course, Hitchcock used a similar diversionary tactic in Psycho; here, however, there’s no payoff.

Once the birds strike, things perk up significantly. The highlight is probably a discussion in a diner that ranges from tense to black comedy, and the actual attacks themselves are handled with all the verve you’d expect (the odd effect, perhaps deliberately, now seems very fake). The best shot, a jungle gym suddenly covered in birds, is still chilling. But the characters’ behaviour is often laughably dumb – Melanie goes into a room filled with birds, alone, in the middle of the night – and the ending is an incredible non-event. The lack of any explanation isn’t a problem, since the reason doesn’t matter, and any theory would likely be a stretch. Besides, at 119 minutes, enough time has already been wasted…