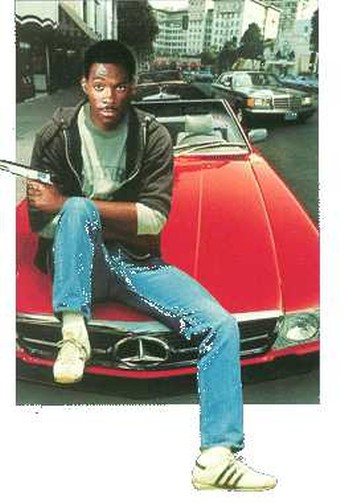 How has one of the iconical pictures of 80’s cinema fared now we’re in the 21st century? The answer is: not too badly, largely thanks to the sheer force of charisma of Eddie Murphy as renegade cop Axel Foley. You can see the influence this had on a host of movies since 1984; coming to this for the first time, this renders it inevitably more than a little stale, yet this was Murphy’s golden era (take a look at Raw and see his slick, incredibly non-PC stand-up routine). He can grin his way through a script without a fresh thought in its head and make it bearable, in much the same way Will Smith does now.

The plot is basic: Foley goes “on holiday” to Los Angeles, only to incur the wrath of both the local cops and smarmy art-dealer Berkoff, who naturally (he’s English – of course he’s the bad guy) turns out to have more than art in his warehouse. The entertainment value here is almost entirely in Murphy’s character, who is at once clever and stupid, and able to engage in the kind of “social engineering” we would all love to do, smart-talking his way into (or out of) any situation. Berkoff might as well be holding up a sign saying “I’m here for the money”, yet this is no bad thing, since it gives Murphy’s character full rein to reign. And for these 105 minutes, he does.