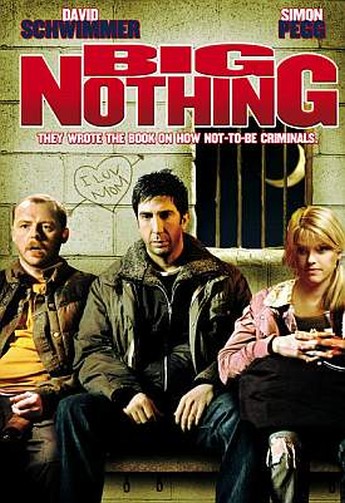 This film hooked me almost immediately, with a scene in a call center where Gus Dickinson (Pegg) is excruciatingly polite to the customers…until he puts them on mute. Which is exactly what happens in such places, let me assure you. He teams up with colleague Charlie (Schwimmer), on a scheme to blackmail those who have been logged visiting porn sites, and opt to start with a local reverend. However, the plan goes wrong, in just about every conceivable way, and the pair, along with their accomplice Josie (Eve), are soon up to their collective necks in FBI agents, two million dollars in cash and a steadily-increasing pile of dead bodies. Did I mention Charlie’s wife is the local sheriff? Or that there’s a serial-killer operating in the same area? Sure, it’s all completely implausible, as things spiral ridiculously out of control, but each small step makes sense at the time, and therein lies the genius of the script, by Andrea, along with Billy Asher.

The idea of Pegg playing an American is odd, to say the least, and certainly takes some getting used to. Fortunately, his accent is up to the task, though I’m less sure Wales and the Isle of Man are adequate stand-ins for the Pacific Northwest. Schwimmer is a nicely-flawed hero, trying to do what he thinks best, and failing miserably at every turn, and the supporting cast are solid; it’s the twists and turns of the story, however, that are probably the star, along with an interesting soundtrack which roams from Rammstein to Eels. It’s a huge shame movies like this – with genuine wit and imagination to spare – get buried and sent straight to DVD, while whatever turd Jim Carrey signs up for, will inevitably appear on 3,000 screens. Still, after the excellent Dead End, Andrea is batting 2-for-2, and we’re certainly looking forward to whatever he may produce down the line.