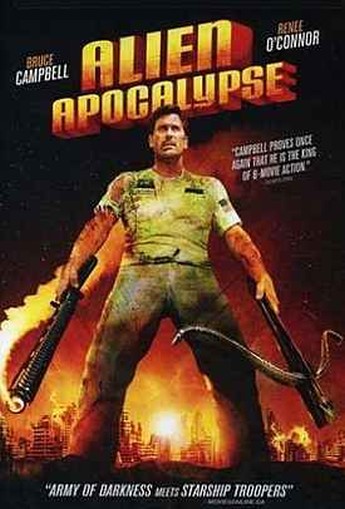 It is an article of faith that no Bruce Campbell film can ever be completely worthless. This one, however, certainly tries the patience: much as the sleeve wants you to believe otherwise, this is not “Army of Darkness meets Starship Troopers.” If the two films in question were on escalators, going in opposite directions, and nodded to each other in passing… That might be more appropriate. Campbell plays Dr. Hood, an astronaut who returns to Earth to find the planet has been taken over by giant termites intent on deforesting it. He escapes from their clutches and leads a motley gang of rebels to try and locate the President, who is rumoured to be putting together a fighting force – a phrase used so often, we took to yelling “…of extraordinary magnitude” at the screen every time it cropped up [see here for why, if you must know].

A memo to the makers; their use of the word “apocalypse” here creates unrealistic expectations, given almost the entire thing takes place around a single Oregon sawmill. “Alien Skirmish,” is a lot closer to the truth, and is what you’d expect when you learn this is a SciFi Channel original movie – a fact buried in tiny print towards the bottom of the sleeve. You get the production values you’d expect, basically a TVM with the occasional moment of quality to surprise the viewer. Here, there’s a lot of CGI, and it’s not really very well-integrated, yet some of the physical effects are not badly handled. Campbell brings his usual energy to the screen, though O’Connor [the irritating sidekick from Xena] is largely wasted, vanishing for much of the film’s middle. It just feels more like a TV pilot than anything, with a voice-over at the end tying up the loose-ends, describing the stuff that we really wanted to see – and which was presumably far too much for the budget.