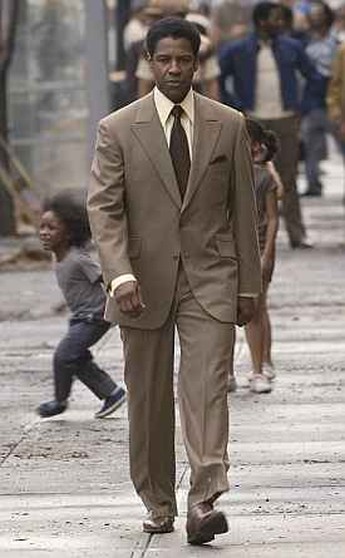 When his patron dies, Frank Lucas (Washington) steps in to fill the breach, promising to maintain the same high ethical standards in his business dealings – even though that business is selling drugs. Importing directly from the source in Thailand, he undercuts traditional powers like the Sicilians, and avoid the traditional trappings of gangster life: he brings his mother and brothers from North Carolina to New York, so they can work alongside him. And since just about every drug cop in New York at the time is on his payroll, who can touch him? The answer is, Richie Roberts (Crowe), who is honest to a fault, even handing over a million dollar in unmarked bills he finds in the trunk of a car. In contrast to the family values respected by Lucas, Roberts’ marriage has failed, and he sucks as a father to his son. So, nothing to distract him from a dogged pursuit of his prey, then.

At almost three hours long, this feels like Scott’s version of a Scorsese pic [who also tends to go on a bit, shall we say]. It is somewhat episodic; the two characters don’t talk to each other until near the end, and so Scott relies on a lot of cross-cutting to tell both their stories. Crowe comes off better in this regard, as we get to see Roberts from the formative moment in his life [the cash in the trunk], while Lucas appears, almost fully-formed, and doesn’t develop much as a character. That said, once the stories intertwine, this is fine cinema, with a great sense of time and place [helped, in what might be another Scorsese influence, by the soundtrack]. The two leads both are given plenty of scope for their characters, and deliver fully on the potential. While I’m not perhaos convinced it needs to be as long as it is, I certainly didn’t mind that it was.