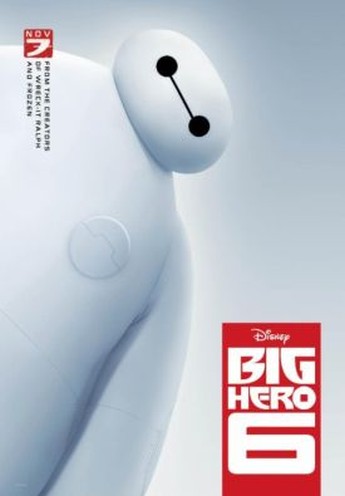 Confession: I thought “Big Hero 6” was the name of the robotic creature. Nope: it’s the name of the team of scientifically-enhanced superheroes, though it isn’t even mentioned until right at the end. Until then, it’s a curiously Japanocentric American film, set in “San Fransokyo”, with a Golden Gate Bridge that looks like a Shinto shrine, and centred on Hiro Hamada (Potter), a 14-year-old genius, who is accepted into a robotic program. Hiro’s ticket in is his “microbots”, tiny robots controlled by thought that can do… just about anything. After refusing to sell them to a industrial corporation, a mysterious fire kills both Hiro’s brother and his mentor, Robert Callaghan (Cromwell). All Hiro has left is Baymax (Adsit), a personal healthcare robot created by his brother. The pair discover the microbots are being used by someone for nefarious purposes, and vow to stop them, with the help of some other members of the robotics program.

It’s pretty plot-heavy – and we haven’t even got to the trans-dimensional portal yet. But it is also fairly smart, worshipping at the altar of science: it’s interesting to see an entire squad of superheroes, none of whom have any inherent special powers beyond being smart, who use technology in cool ways [in a manner not dissimilar to Howard Stark]. It is a little too self-consciously otaku, but at least has a relatively light hand on the morality hose. And Baymax is a lovely creation, which deserves to be filed alongside Wall-E, as among the most flatout adorable robots of all time. Particularly when his battery is running low, and he’s staggering around in a cybernetic version of drunk. To be honest, he’s probably more engaging than Hiro or the rest of the troupe, and this is true for the movie as a whole: the technological aspects are likely better realized than the human ones, such as the storyline. It’s fun enough, though for any a sequel, I’d be more inclined to welcome a story where Baymax heads off on a solo adventure.