It’s perhaps surprising, given my fondness for badfilm, that I had never quite got round to watching this, often regarded as the worst movie of all time. At one point, it was thus ranked on the IMDb: though it has now been replaced there (the current incumbent is this year’s Saving Christmas, though I suspect it won’t last, and will eventually return the crown to Birdemic), Manos remains in the bottom dozen. A lot of the responsibility for this has to belong to Mystery Science Theater 3000, who plucked the film from near-total obscurity when they picked it as a target in 1993 – to the shock of the cast, who hadn’t seen it in a quarter of a century. I watched their take on the film the morning after watching the “raw” version, and certainly can’t argue with it being perfect material for their satire. But, on the other hand, nor would I necessarily say I enjoyed it more.

Can I find anything to say about the film, that hasn’t been said a million times before? Well, I’ll try. However, I’ll start by dutifully recounting the plot, such as it is. On the way to their vacation, husband and wife Michael (Warren) and Margaret (Mahree), along with their young daughter and family dog, find themselves lost, and forced to spend the night at a remote residence. The caretaker, Torgo (Reynolds), keeps referring to the “Master” (Neyman), as if he is both dead and alive. Turns out, he’s a bit of both, and is the head of a polygamist occult cult with a fondness for human sacrifice (as well as, it appears, an unlimited expense account at Frederick’s of Hollywood), and has designs on both female guests as wives #7 and #8.

However, to me, it doesn’t deserve to be considered the worst film of all time. Writer-director-producer Warren was a salesman by trade, and made this on a bar bet with Stirling Silliphant, a Hollywood screenwriter best known for In the Heat of the Night. But he seems largely aware of his limitations and doesn’t try to do anything particularly excessive. Compare, say, The Creeping Terror, which is equally as bad in most technical departments. but also mocks up an alien creature using what appears to be cast-off remnants of carpet. Such miserable failure is a worse cinematic crime than not trying at all. [There’s a reason monster movies occupy a special place in the temple of badmovie, something which continues to the present day with Birdemic and, arguably, the more self-aware Sharknado and its ilk]

The other element which saves this is John Reynolds’ fabulous performance as Torgo. I wouldn’t necessarily go as far as to call Reynolds a good actor. I’d need to see him in something else to decide that, and this won’t happen as, sadly, he committed suicide between the end of production and the film’s release. It’s also reported that he was frequently high on set, which would explain a great deal about his portrayal of Torgo, which feels completely disconnected, not just from the other performers, but reality in general. However, it seems not just appropriate, but spot-on for an acolyte in a cult, devoted to the Master with an almost brainwashed mentality. Right from the first time you see him, Torgo exudes a creepy air: eyes half-closed, as if is he is frantically masturbating out of the camera’s view. 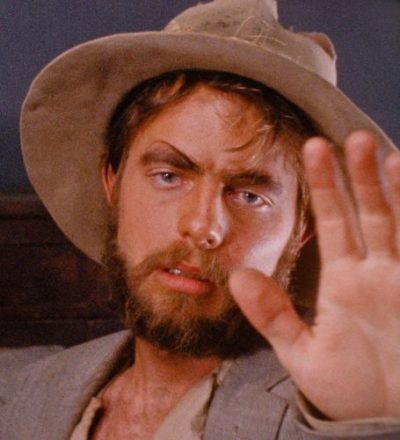 The film’s status has also helped to generate its fair share of myths. For instance, some legends say Torgo was supposed to have cloven feet and be some kind of satyr creature. While it is generally agreed he did wear leg braces for the film, I’m not certain what the point is, since when you see his feet in the film, there’s no apparent indication of any hooves. It just makes Torgo look gimpy – and this in turn makes Michael seem a dick, as he barks at a disabled guy to carry his bags about. In some retellings, the lore goes further, saying Reynolds wore the braces backwards, with the discomfort caused leading to him becoming addicted to painkillers and factoring in to his demise. This has been flatly denied by Jackey Neyman, who played the daughter, and has documented the experiences of her and her father, both in making the movie, and since its cult renaissance, courtesy of MST3K.

It seems silly and largely unnecessary to make stuff up, since there are many completely woeful aspects worthy of spotlighting. The script, in particular, is badly underwritten, and even at 68 minutes, there isn’t enough going on to cover that length. It doesn’t so much hit the ground running as crawling, with a lengthy opening sequence of little or no interest, which sets the tone for a lot of what’s to come, and segues – not for the last time – into a lengthy necking scene featuring a pair of middle-aged “teenagers”, who are then hassled by the local cops. Neither group play any significant part in the main story, with the closest approach being the cops almost investigating at one point. Another bit of film lore says the woman was originally scheduled to play Margaret, but broke her leg; Warren added this sub-plot so she could still be in the film. Given the end result, this kindness seems somewhat of a double-edged sword. 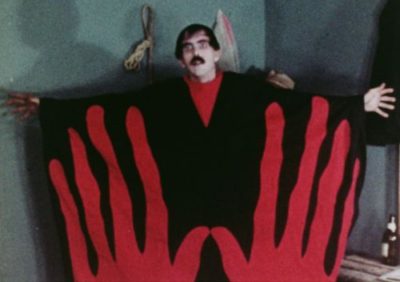 I could go through and pick apart every aspect of the film in a similar fashion, but really, what’s the point, beyond burning every available thesaurus entry for “bad”. But I feel I should mention some of the particular lowlights, starting with the Master’s amazing robe (right). It’s printed with a pair of giant hands on each side; the problem is, you can only see these when he has his arms stretched out at his sides. So, he does it a lot. An awful lot. You could make a drinking game out of that alone. British readers of a certain age may, like me, be reminded of Kenny Everett’s character, Brother Lee Love, another religious figure with similarly over-sized mitts.

However, perhaps my favorite section of the entire movie is the middle, where the master’s wives get into a six-way catfight and Torgo is “massaged to death” for insubordination and having lustful thoughts about the Master’s harem. That phrase was apparently taken from an El Paso Herald-Post review at the time the movie was released, though it isn’t entirely accurate. The last we see of Torgo, he has had a hand removed and turned into a novelty candle by the Master, then runs off into the desert, waving the burning stump around, apparently to light his path. That’s what passes for closure in this film. But given his previously-demonstrated ability suddenly to come out of nowhere and whack the hero across the back into unconsciousness, you spend the remainder of the running-time wondering if there will be an equally abrupt return.

It’s quite a surreal experience all told, and the ending feels to me like Carnival of Souls, which was released four years previously. Indeed, this is one of those rare movies which might have been improved if Warren had used the cop-out, “…and it was all a dream.” While that would not have helped with the shoddy camerawork, bad dubbing (poor Jackey Neyman supposedly burst into tears at the premiere, on hearing someone else’s voice come out of her mouth) and production values that can only aspire to scraping the bottom of the barrel, it would at least have been in keeping with the overall delirious tone of proceedings. If MST3K are remembered for nothing else, they have to be commended for saving this piece of work from the oblivion it richly deserves.