The actors here are unknown: neither the IMDb nor any other online sources list the names, and I didn’t think to make a note before deleting it. I suppose I could download it again, to find the participants… Nah. It’s really not worth it. [Update: the IMDb now lists Sara Lee Wade, Jack Catalano and Scott Ingram as the stars. ]Though this 1984 film, produced in conjunction with one of the pioneers of independent media, EZTV, has some interesting parallels to Natural Born Killers, which it preceded by a decade. 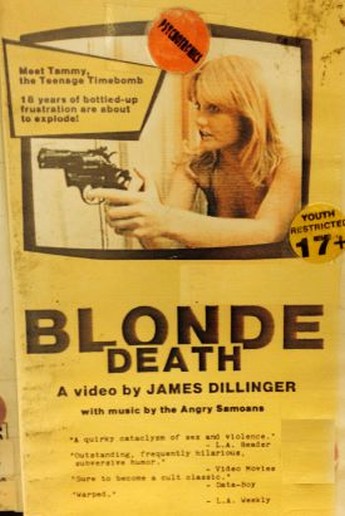 The focus is Tammy, a teenager who moves to the California coast with her father and stepmother, only to find herself falling for the ultimate badboy, who has broken out of jail and takes refuge in Tammy’s house. Lucky for her he does, since it turns out Tammy’s stepmother is trying to get rid of her with poisoned Tylenol (which was A Big Thing at the time) and cyanide-laced Tang. After kinda-accidentally killing both her parents, as well as a predatory one-eyed lesbian, they are by her beau’s cellmate to form a Bonnie and Clyde and Clyde menage a trois. Further criminality ensues, but the forces of the law are closing in on our reckless renegades, and ironic fate has a final twist in store for our star-crossed lovers.

This has been compared to John Waters’ early work and I can see why, although it lacks the larger-than-life presence of characters like Divine, which helped Waters achieve breakout success. However, it also lacks the obvious “Aren’t we shocking?” showboating, and that isn’t a bad thing: stuff like eating dog-shit always seemed like a crude and pointless distraction from Waters’ more subversive elements. Here, the subversion is in a rottweiler approach to things like the hypocrisy of religion, Tammy’s stepmother having an affair with a religious broadcaster.

It’s in this relentless skewering of “family values” that you can see foreshadows of NBK, particularly the Rodney Dangerfield/Edie McClurg sequence, though Baker has neither the resources nor the imagination possessed by Stone. Kinda creepy watching two of the characters die by carbon monoxide poisoning in a garage, since that’s the way the director killed himself in 1997. Probably almost as ironic a fate as the one met by the leads here, who [ah, spoiler alert, dammit] also commit suicide after mistaking Jehovah’s Witnesses for the cops. If that is really the only moment where everything works, with Baker frequently mistaking wild flailing for satire, this still deserves a portion of respect, for being ahead of its time in some ways.