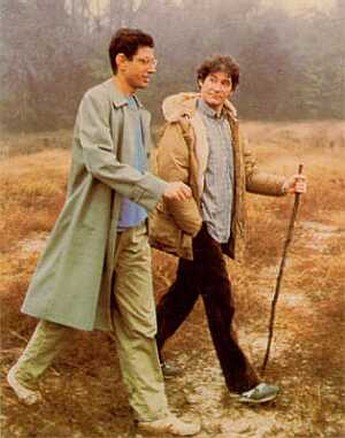 Much like Fast Times at Ridgemont High, this is a bit of a touchstone for people who’d go on to greater fame: besides the above, there’s Kevin Kline, Meg Tilly and even Kevin Costner as the dead guy. [One of his more restrained performances, in which we never see his face] He is Alex, a suicide whose death reunites his college friends for a weekend of mourning, recrimination and the usual emotional outpourings. There lies the problem – I was unable to connect to the characters, who were irritatingly shallow, deceitful and perpetually whiny about how awful their lives were. It reminded me of a feature-length Big Brother episode – no wonder Alex slit his wrists.

Among this bunch, honesty is in desperately short supply; what little there is, comes from Hurt’s drug-fuelled sleazebag, and it’s a welcome (if short-lived) blast that exposes much hypocrisy. The dialogue does have its moments: Goldblum’s reporter getting the best of them, but he delivers with his usual smugness, and the film is largely a waste of the proto-talent on view. By the end of it, you suspect any changes will be temporary – save for the woman who spent the weekend choosing a surrogate husband, perhaps. Everyone else will go back to their comfortable lives, and start complaining once more. Good riddance.