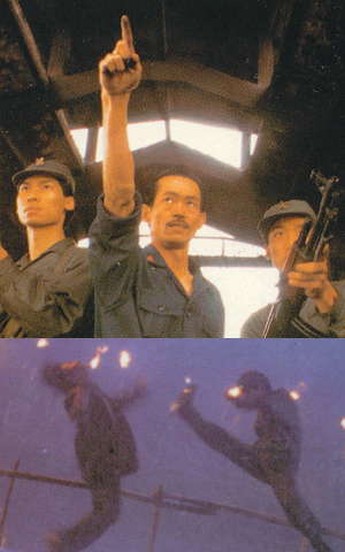 If you think Feng Shui is all boring twaddle about arranging furniture, this film might just change your mind, since it uses the Eastern practice as the springboard for a large-scale action romp. You might want to pay attention to the prologue, as the rest of the film will make little sense otherwise…or you might not, since it’s still mindless fun regardless. Lee and Chin head off to the spot where their respective fathers are buried, because the site chosen for the graves is causing trouble for them. They clash with military dictator Yuen who has reburied his dad in order to increase his own power, but team up with his sister (Hu) to fix things.

It’s an undoubtedly lavish production, partly shot in America, which for a Hong Kong production is rare indeed. The cinematography in particular looks great, and the work of Pau Hei-Ming (who also did Saviour of the Soul), was rightly nominated for a Hong Kong Film Award; it’s one of the few HK films truly to use the widescreen format. But it’s badly hampered by a lack of characterisation – everyone always seems so busy, running around doing things, that you never get a chance to know them. Lee and Hu are also sadly underused on the action front, though Chin and Yuen face off memorably at the end. I suspect you’d get more out of the film if you know something about geomancy: understandable explanation is definitely not this movie’s strong suit!