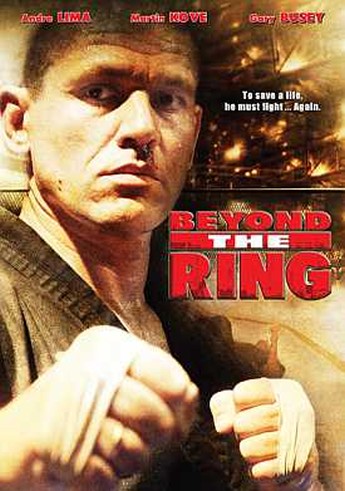 The problem here is mostly a cliched script, which had us rolling our eyes as it unfolded. Retired fighter Andre Lima (er, played by Lima), forced into an underground fighting bout to raise funds for his daughter’s cancer surgery? Really. If you’re going to come out and expect us to swallow that, you’d better have surprisingly-good acting and some seriously kick-ass fight scenes. At this point, the film stares at its feet, mumbling something inaudible, because it can’t deliver satisfactorily on either score. It does rather better on the former than the latter; Busey is solid as the sleazy promoter, and despite English not being his main language, Lima holds his own as far as drama goes. He’s certainly no worse than Van Damme or Seagal in their early works, and it perhaps helps that playing his daugher is Aycka Lima, André’s real daughter, minimizing the need for any actual “acting”. The story does have one unexpected twist, even if the writers tease a second, even bigger one, before wimping out. If they’d had the guts to follow through there, it would have made things a lot more memorable.

And the problem with the action is more one of quantity than quality; after the opening credits, there is one sparring session and only one actual match. I expected much more, and they could easily have slotted in additional fights instead of the training sequences, which see Lima “pulling” a Hummer. Quotes used advisedly, since too often, you can see the chains connecting him to it dangling loosely. All told, our interest skated on some very thin ice, yet somehow avoided falling through entirely; while I can’t deny the movie’s heart, nor can I in honesty recommend it. I note that this is almost a remake of the director’s debut, Maximum Cage Fighting, where a retired fighter is again forced back in to the ring to save his daughter – in that case because she’d been kidnapped. But since both DVDs have been released in the US within two weeks of each other, I can only presume this is a cunning attempt to corner the market in films about mixed martial-artists with strong family values. Good luck with that.