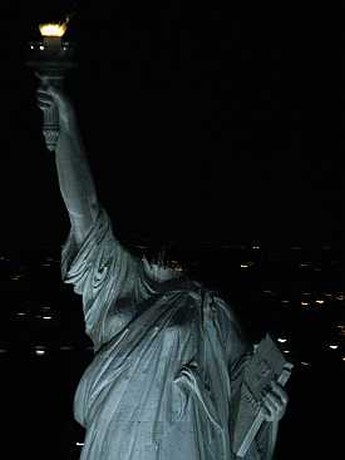 I’ve been eagerly anticipating this since the original teaser-trailer: now it’s here, does it live up to the hype? [Or, to be fairer, the utter secrecy?] Yes…and no. It’s good, but is not the utterly ground-breaking work some people would have you think; mind you, I didn’t think that much of Serenity, so perhaps I’m just not on the same wavelength as creator JJ Abrams. The film is entirely shot hand-held, and basically tells the story of one night, where a going-away party for Rob (Stahl-David) is interrupted by what at first feels like an earthquake. However, it soon becomes clear that, to borrow a line from The Thing, something ‘weird and pissed-off’, as well as extremely large, is attacking New York like an Al-Qaeda wet dream: Hollywood is now clearly over that whole 9/11 thing, folks. Accompanied by best friend Hud (Miller), who becomes the de-facto cameraman, plus Lily (Lucas) and Marlena (Caplan), Rob leads his [young, photogenic] posse through an increasingly-destroyed cityscape, in search of [the young, equally photogenic] girlfriend Beth. [The only ugly thing in this New York, is the monster]

It is therefore an unusual blend: a small, intimate, personal…giant monster flick. The authorities, science and the military are supporting characters at best; while just about every review has called this Blair Witch meets Godzilla, I’m heading in another direction and saying it’s more like Miracle Mile meets Night of the Living Dead. As in the former, it’s the story of a man’s desperate search for his other half, as civilization unravels at a fearsome pace; they both even have a very similar scene in a helicopter. But it also shares the latter’s claustrophobic intensity [Cloverfield‘s characters spend most the film in one confined space or another], in addition to the almost-complete lack of an explanation for what’s happening. The dead live? An F-sized monster attacking the city? Who cares why, just deal with it, whatever way you can. 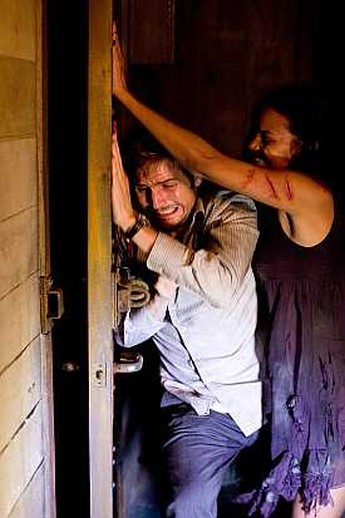 The hand-held camera, the biggest gun in the film’s cinematic arsenal, is also its biggest weakness. While it does invoke a sense of ‘being there’, this diminishes the longer it goes on, rapidly becoming tiresome rather than invigorating. Why is it always a bumbling amateur cameraman, not a professional videographer, on the camping trip or whose city is attacked? It’s a huge stretch to believe a man like Hud, who had the camera foisted on him, would not dump it and run, especially during the subway tunnel sequence. Those who are susceptible to motion sickness should avoid or certainly take precautionary measures – Chris spent the second half with her eyes closed – and whatever camera is used is remarkably robust, and appears to contain the Batteries of Infinite Duration. The rest of the film is very nicely crafted; a lot of effort went in to the blasted cityscape through which the characters run, and there are moments of genuine emotion from the no-name cast, such as Rob taking to his mother on his cellphone. [There’s another similarly modern moment, after the decapitated head of Lady Liberty rolls down the street, and everyone whips out their phones to photograph it.]

The monster itself is phenomenally cool, and one can see why Cthulhu was invoked as a possible subject; if you saw this, it would certainly send you shrieking in terror (make your saving throw, or lose 1d4 Sanity Points). However, it likely deserves more than this one-camera treatment: I would love to have seen that, instead, woven into a multi-media extravaganza, incorporating news footage, security cameras, the Internet, etc. to create the first fully functional, 21st-century movie – rather than one which looks like it would be more at home on Youtube. Reeves certainly crams a lot in to a scant 75 minutes before the closing credits, and it’s worth sitting through those for Michael Giacchino’s rousing final score, which clearly invokes Akira Ifukube’s Godzilla theme. A sequel is already in the works, and I’ll certainly be there: hopefully that will do a better job of extracting all the potential here, rather than concentrating absolutely on a single camera-angle.