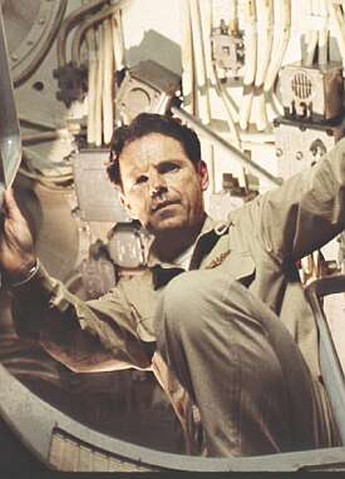 A haunted-house film set on a WW2 submarine does at least remove the “Why don’t they leave?” problem. Unfortunately, more than once I was left in the dark – like the extremely underlit characters – as to what the hell was happening. For example, at one point, a huge explosion supposedly rocks the sub; no-one seems to notice. Perhaps our DVD skipped five minutes or something. Equally, there’s a sequence where crewmen go into the hull to fix a leak; if you can tell what actually happened, you’re a more perceptive viewer than I.

The basics are pretty clear: the submarine picks up survivors from a torpedoed boat, only for increasingly strange things to happen. These may be connected to the mysterious loss of the captain…oh, who am I kidding. Of course they are. A lot of the little things work well, such as a depth-charge bouncing along the length of the ship, or a chilling moment involving a reflection. But the results are dampened by unconvincing characters, plus plotting that’s obscure when it should be clear, and clear when it should be obscure – I spotted the big twist five minutes after the survivors were rescued. Despite a fine recreation of life in an underwater tin can, this is a failure, albeit a convincingly claustrophobic one.