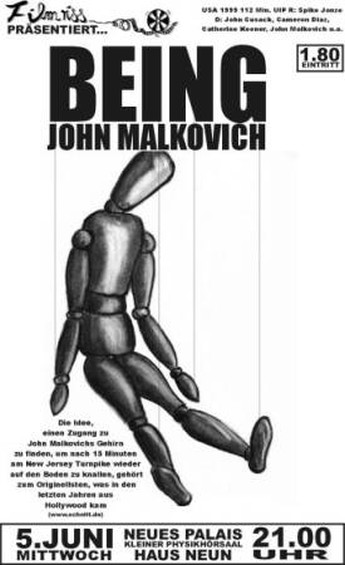 The central premise is absurd: puppeteer Cusack finds a portal in his office which lets him take over Malkovich. Yet if you can take this leap of faith as read, the rest of the film is surprisingly logical, as Cusack’s attempts to exploit his find lead to a whole bunch of issues, good and bad. After an initial blizzard of ideas (lovely idea to have him working on the “7 1/2th” floor), this is perhaps not quite as clever as it thinks. To quote one studio executive, the script “probably would be hailed as an inspired piece of work on the planet on which it was written”, and I concur; it never lets little things like coherence get in the way of deep philosophical ruminations on the nature of identity.

Cusack is, as usual, excellent, and Diaz is a pleasant surprise too. As for John Malkovoch himself, how can you criticise someone largely playing himself? Jonze needs to exercise far more restraint on his self-indulgence, but at least he’s not guilty of pandering to the lowest common denominator. Do not expect the sequel, Being Sylvester Stallone, anytime soon.