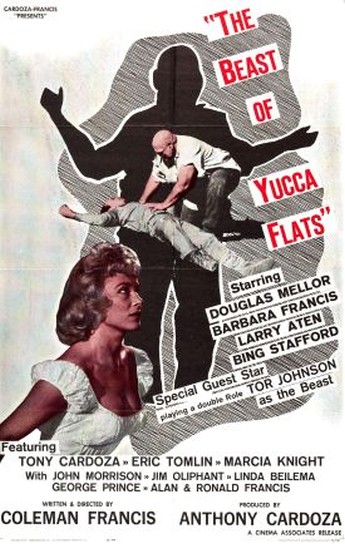 There are some bad movies that are all-round bad. Others stand out particularly because of one aspect: maybe the acting or the special effects are particularly deficient. Here, it’s the audio: you quickly realize that the makers had absolutely no way to record sync sound, and so resort to a bevy of not-so subtle tricks to disguise this fact. Long-shots, discussions where people keep their back to the camera… This technique – at it isn’t long before it less disguises the problem, than draws attention to it – probably reached its nadir with a shot from inside a car, looking out. Two people approach the car, stop and have a fairly lengthy conversation outside… with their heads cut off by the window, so can only see from their shoulders down throughout. We laughed like drains. The other major issue is casting Tor Johnson as a Soviet rocket scientist: he is instantly inducted into the Implausible Scientist Hall of Fame, alongside Charlie Sheen, Raquel Welch and Denise Richards.

Not that the rest of the film is much better, beginning with the opening scene, depicting the strangulation of a woman, accompanied by a loud ticking clock. We’re still waiting to find out how this ties in with anything else in the movie. The actual plot concerns Soviet scientist Joseph Javorsky (Johnson) who, while running from Russian agents after his defection, accidentally enters the Yucca Flats nuclear testing range. There, he receives a dose of radiation, strong enough to set his briefcase on fire – yet, curiously, leave his clothes almost untouched – which turns Javorsky into the titular beast. He spends the next hour staggering around the desert, mostly chasing after the vacationing Radcliffe family under patriarch Hank (Mellor), as the local police hunt the monster – and occasionally, Hank, in a lengthy aerial sequence which appears to be there purely because the producer got the use of a plane for a bit. North by North-west, it is not.

There’s certainly plenty of entertainment value to be had here, though only an infinitesimal amount is actually as intended by the makers. Despite my comments above, I actually enjoy Johnson, at least in Beast Mode, roaming the desert like Frankenstein’s lost monster, a victim of the science he thought he had mastered. Any poignancy here is, I’m sure, entirely accidental, for the rest of the film staggers from one ill-conceived sequence to another, with a copious overabundance of narration from the writer-director in lieu of a script. He spits out semi-random non sequiturs such as “Flag on the moon. How did it get there?” or “Nothing bothers some people, not even flying saucers.” Though it did bring home, how men in the early sixties wore hats EVERYWHERE.