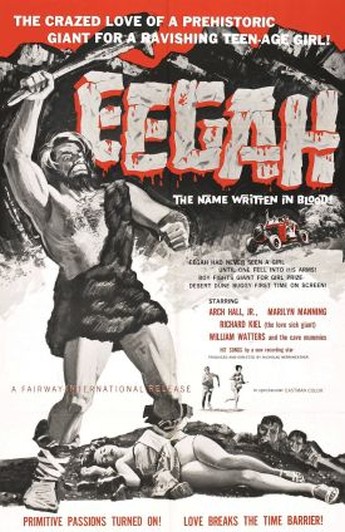 While driving to a party in the desert, Roxy (Manning) almost runs into a giant caveman (Kiel) in the middle of the road. Mocked when describing her encounter, her boyfriend, Tom (Hall Jr.), and his father, Robert (Hall Sr.), are eventually convinced after seeing footprints at the scene of the encounter. Robert goes up to the high country to seek the beast, but when he fails to return, Roxy and Tom go look for him. Roxy is captured by the caveman and taken back to his cave, where Robert is also captive. They befriend the giant, whom they name Eegah – even giving him a nice shave! – so he will drop his guard, allowing them to escape. However, the love-lorn creature missed his bride, and follows them (somehow, the film choosing to remain vague on the specifics) back to civilization, where he rampages his way through a party, before dying in a King Kong-esque finale. By which I mean, “it was beauty that killed the beast,” rather than anything involving scale or competent special effects.

And did I mention it’s a musical? For Hall Jr. is a wannabe crooner, who bursts into song at several points during the movie, both solo and as an ensemble. Let’s just say, the fact that he went on to become a pilot may be significant. Otherwise, the beginning and end of this are not too bad: I wish we’d seen more of Eegah rampaging through (and, to a certain extent, interacting with) civilization, as that’s a good deal more entertaining than both Roxy and Tom roaming the desert in their dune-buggy, and Roxy and Robert trapped in a cave. Nor is there any meaningful explanation of how Eegah managed to survive the millennia undiscovered by humanity, particularly since he appears to be the last of his species, with no Mrs. Eegah to be found. Kiel would, of course, go on to greater renown (much greater than either Hall, certainly) as Bond villain Jaws, after this unauspicious start to his career. It certainly doesn’t live up to its tagline – “The crazed love of a prehistoric giant for a ravishing teen-age girl! – and at a full 90 minutes, there’s too much fillin’ and not enough killin’. This is one case where the MST3K’d version of the movie is likely a significant improvement.