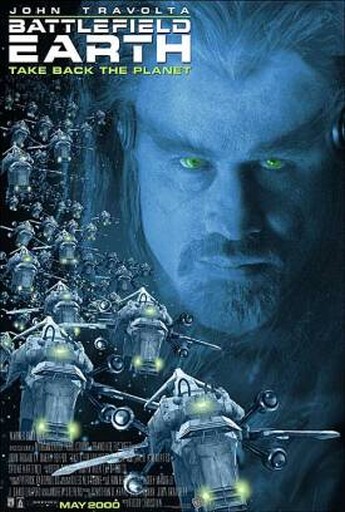 I have to say that I was really paranoid about going to see this film. Especially after what happened with the book in 1990, and the Church of Scientology got busted for paying their members to buy 6 and 7 copies of the novel in order to boost sales and keep it on the bestseller list. All I thought was that the theatre was going to be filled to capacity with boatloads of Scientologists just waiting for their crack at convincing me and my family to join them in their quest to *Clear* this planet. And then my brother tells me that I fit the profile since I almost went to an “est” training seminar 20 years ago to impress a guy I was dating who had way more looks than brains. But that’s another story. It’s time to…

I don’t know where to start. First of all, I would like to say that this must qualify as the most awful film I think it has been my utter displeasure to have attended in my entire life. So many questions kept mulling in my very busy mind as I succumbed to the ravages of the writers’ non-imaginations. From the novel by L. Ron Hubbard (Church of Scientology founder accused of many bad things) and screenplay by Corey Mandell (no other screenplays to his credit) and JD Shapiro (Robin Hood – Men in Tights), there is just no way to sit through this film and even try to suspend your disbelief when there are just way too many holes, horrible acting (John, Forrest, please, tell me, what were you thinking?) and other stuff that bothered me — such as, why did their hands look like they bought them at after-Halloween sale bins? 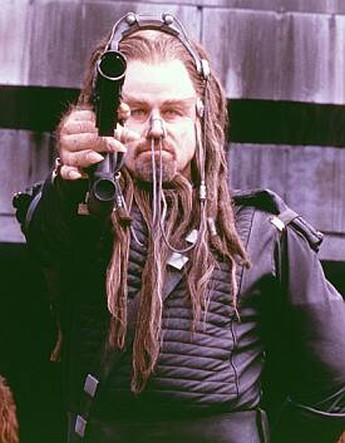 John Travolta, Forrest Whitaker and some other greedy alien overlords are using what is left of the human race in the year 3000 as a means to their own ends, teaching them to speak their language, fly ships and mine for resources with the intention of exterminating them after they were done. Of course, the slightly evolved neanderthals not only learn these things, they learn to fly Harriers like pros in flight simulators over 1000 years old, that function with magic electricity, in a revolt against the aliens. Then… oh never mind. There is no then. That’s it. It’s a piece of garbage. And I can’t believe they’re working on a sequel. Of course, if you studied your L. Ron Hubbard books and know about the hatred he had for Psychologists and Psychiatrists, it would make sense why the aliens were called “Psychlos” and the other bad people were called “ciatrists”.

I was wondering if there were more examples of Find the Scientology Reference in this film, but frankly, I couldn’t be interrupted from my yawning marathon. There is so much rip-off in this movie from other films that it’s quite offensive. And what is it with all the camera tilting? I don’t see the point. In the end, the only thing I liked were the special effects, and the cool, old hologram language teacher and his five minutes of coolness, but they would not be the saving grace of this blunder that won’t even be crucified by the now cancelled MST3K and too bad, because they would have had a field day with this one.

The theatres I called were sold out and this one was almost sold out, but when it started, more than half the theatre was empty. Makes you wonder, doesn’t it? Remember. You heard it here first. Stay away.