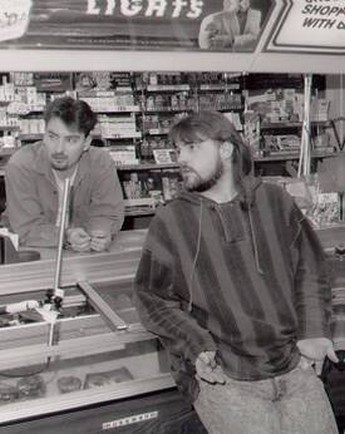 Sixteen hours or so in the life of a convenience store clerk, as he deals with hockey games, funerals, irritating mates, girlfriends (ex- and current)…oh, and the odd customer. Very odd. Smith’s debut works largely because of an excellent script which builds its characters through incidents and their reactions to them. Because this has been so well-polished, you forget about the static camera (Smith seems totally lost outside the store), b&w stock and highly limited plot. Time flies past in the company of these slackers, even if you get the feeling that the director was asleep as often as our top still shows.

Looking at it now, you wonder if Silent Bob was a precursor for The Sphinx in Gone in Sixty Seconds, and the credit line “Jay and Silent Bob will return in Dogma” suggests Smith was planning ahead, though he had to get past the bearable Mallrats and mediocre Chasing Amy first. It doesn’t all work; the lack of narrative thread sometimes leaves you feeling Smith is just showcasing his pop-culture knowledge. But on a dollars-per-grin basis, it’s certainly a leading title contender.