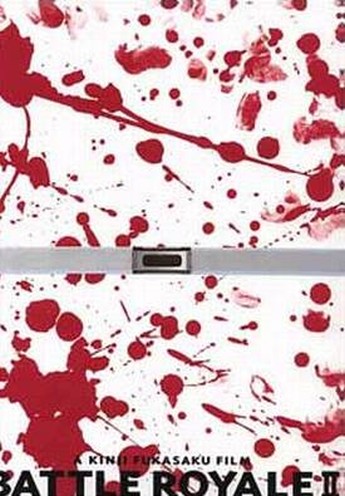 A startling opening – the entire skyline of Shinjuku collapsing under terrorist attack – eventually peters out into something which, at best, only plays like a high-school version of Saving Private Ryan. Survivors of the Battle Royale game have founded a group and declared war on adults from an island. Rather than, oh, calling in an air strike, authorities send in another class of kids. They are “wedlocked”, for no good reason, in pairs with explosive collars; if one dies, so does the other. However, once on the island, the survivors switch sides and join the terrorists. Naturally, the government isn’t standing for that, and brings in the regular troops.

It’s mostly a ludicrous concept, but the opening, and its pro-terrorist stance, likely doom its chances of a US release as much as the youth violence in the original. Pitting kids against kids lacks the impact it had, though the initial assault has a cruel beauty to it equal to anything first time round (despite obvious CGI blood). However, once the two sides join hands, it’s filled with rants about a simplistic and totally unconvincing world-view – and I’m as opposed to America acting like a school-bully as anyone. Takeuchi, familiar from many Miike movies, takes the Kitano role here, and makes an impression as an amphetamine-crazed pedagogue. The rest of the cast don’t fare as well, their eventual fates provoking virtually no emotion. It’s a film that works better as an advert for the Afghanistan Tourist Board than as a movie.