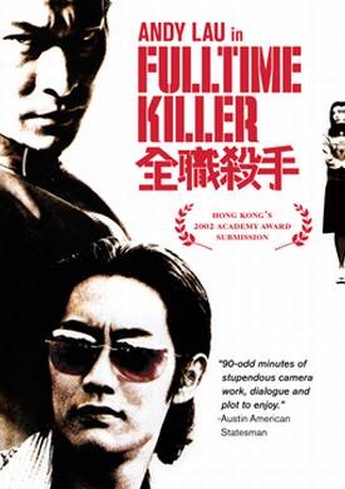 Tok (Lau) is a killer with a flamboyant style inspired by action flicks, and an all-consuming desire to be #1, a position currently held by near-invisible assassin O (Sorimachi). To achieve his ends, he snuggles up to O’s maid (Lin), who at first doesn’t believe Tok’s profession, but comes to embrace it. Meanwhile, Interpol, led by Inspector Lee (Yam) is closing in. Lau is wonderfully over-the-top, channeling in one performance every movie killer ever known, from Hannibal Lecter to Leon, and the action sequences are also great, fabulous pieces of adrenaline-drenched cinema. Tarantino, please note: this is how to pay homage.

Unfortunately, the relationships portrayed here fail to bring anything to the film, and slow it down by recycling stuff we’ve seen far too often before: the obsessed cop, the innocent seduced by the killer, the stoic assassin betrayed by his employer. None of this is really new, interesting, or given sufficient impetus by the actors. And while the mix of three languages is cool, it hampers the performances, since half the cast are very obviously not speaking their primary tongue. In any other film, this would be potentially fatal, and it says a lot that here, the good elements are easily enough to see you over the bumps in the road.