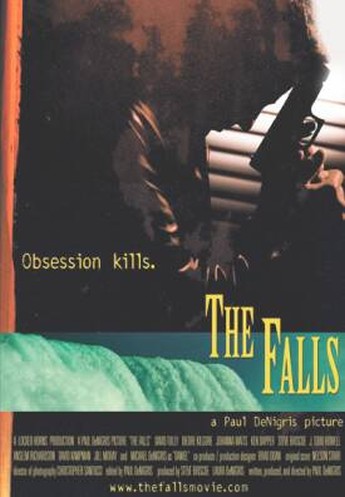 The director appears to be going for a hard-boiled, film noir style: voiceover, femme fatale, flashbacks, jazz…y’know the kind of thing. And fifty years ago, it would probably have worked; unfortunately, the modern audience is a good deal more savvy, and the big twist here should be obvious, well in advance, to all but the least attentive. When David Marx’ former girlfriend vanishes, he’s prime suspect; so, to clear his name, sets out to find her. This leads into a treacherous maze of deceit, death and a cash-filled suitcase, climaxing in a cave beneath Niagara Falls.

Despite an interesting use of tints on digital video, there’s very little here to capture your attention, and often, characters’ behaviour seems strangely unmotivated. In particular, jazz singer Scott Pierson at first seems like a prime suspect; but while the film later exonerates him, his actions remain those of a guilty man, and are never explained. Even the hero sometimes behaves in ways that are difficult to accept, for example, leaping into bed with his ex’s room-mate. One nice angle is that the missing girl is the daughter of the man who effectively rules Buffalo. However, his behaviour is no more logical, swinging from apparent hatred of Marx, to handing him a bag of ransom money. With such sloppy writing, it’s unsurprising the final revelations provoke little more than a raised eyebrow.