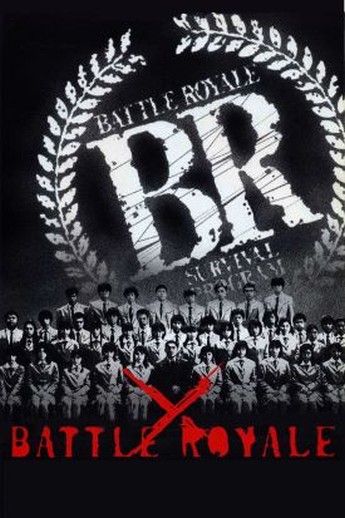 12 years after it came out in Japan, and a year after its “official” US release, on rewatching it… can’t help wondering what all the fuss was about. It’s hard to find the child violence shocking, in the wake of something like Kick-Ass, though its obvious closest cousin is an even bigger summer blockbuster, The Hunger Games. That said, it does still pack some good moments of effective wallop, especially early on, as the teenage class are drugged, and wake up to find themselves at the absolute mercy of a former teacher (Kitano), who seizes his chance to turn with great gusto. The video sequence where the scarily cheery hostess explains the rules is still mightily impressive, but there’s an undeniable feeling of desensitization as things proceed, enhanced by the fact that we are rarely given any significant reason to care about any of the victims – the main “hero”, Shuya (Fujiwara), seems to spend most of his time cowering in a farmhouse.

Perhaps the most memorable sequence occurs in the middle where Shuya is rescued by one of the school’s cheerleading squad, which eventually leads to its disintegration in a hail of bullets, poison, paranoia and recriminations. There’s also a small role for Chiaki Kuriyama, here playing an athlete, who’d go on to much more memorable things as Gogo Yubari in Kill Bill, Volume 1. However, the general trend after the game actually starts, is largely downhill, and it’s worth noting that the game itself – unlike its, ah, hungrier colleague – doesn’t appear to be televised, which robs the concept of much point, and the lack of focus for much of the running time leaves the viewer without a subject towards whom they can feel empathy. Its reputation is, I think, largely the result of fortuitous timing, coming out in the wake of Columbine, even if not particularly influenced by it. Now, we’re largely desensitized, at least to media depictions of child killings (though as Newtown proves, the real thing can still shock, and shock horribly), and this doesn’t have enough beyond that to merit particular interest. Severely, a product of its time.

Original review. It’s pretty rare for a film to be effectively banned in America, but post-Columbine, no distributor is going to touch this one with anyone else’s ten-foot bargepole. Set in a ruthless future Japan, every year sees a class of teenagers dumped on an island and left to kill each other for three days until only one survives – if more than one lives, they all die. The reasons why are never explained; the class is selected at random, so there can be no deterrent effect, and there’s very little media coverage shown so it can’t be a new kind of gladiatorial games for a degenerate society. It does, however, remain highly disturbing to see a class of 42 kids whittled down, complete with scorecard, overseen by a teacher who is every bit as much a loser as any of them. At approximately one death every two minutes, you never really feel anything for most of the participants, who are barely announced before shuffling off this mortal coil, in generally spectacular fashion. That may be the point, though director Fukasaku has claimed he was inspired by his wartime stint in a regularly-bombed factory, and it’s a study of what happens to people under pressure. I’m not so sure, but even if merely a stalk and slash film, it’s remarkably effective – because when the circumstances are right, the monster could just as easily be any of us. B