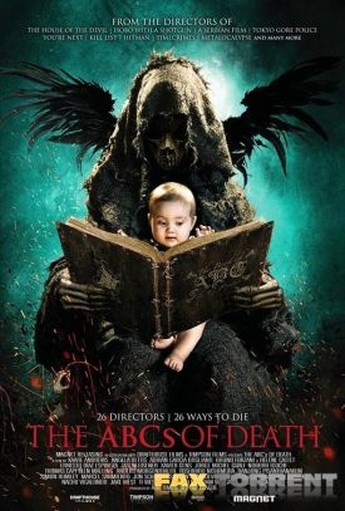 How the hell do I review this? 26 films, each loosely about death, averaging less than five minutes in length: the results of what happens when you give 26 directors a letter of the alphabet and, basically, free rein. Do I cover all 26? Pick the ones that stood out? And how do I rate something which veers so completely over the place, from impenetrably incomprehensible, or just plain bad, to brilliant? Let’s cover those that stood out most: the best (“T”) was virtually the last to get in, Lee Hardcastle’s ubergory claymation tale of terrible toilet training, which deservedly won a contest to get a slot. What this showed was that it is entirely possible to tell an entire story in the time allotted. something a number of entries seemed to forget, or not even bother to attempt. However, Xavier Gens’s “X” proved you didn’t necessarily need much plot, with a gruesome story of body self-image that will not be easy to forget. Marcel Sarmiento’s “D” also offered a new twist on what it initially seemed, and was executed with great technical skill.

But for every one of these, there was an “F”, which appears to have strayed in from the creepy end of Japanese fetish porn, followed immediately by a “G” that’s forgettable in every way. Actually, none of the three Japanese-directed entries were what I thought: maybe they save up all their twisted imagination for the features. I did appreciate the variety in tone, and the way the word used by the director was only revealed at the end of their contribution: sometimes that proved enlightening, but other times, not so much e.g. “H is for Hydro-Electric Diffusion”? [It seems some were also switched after submission, curiously… B was originally Y, for instance, which does weaken the concept here, making it more a conceit than providing a solid structure.] In the final analysis, it has the inevitable flaw of all anthologies – unevenness of quality, magnified massively as a result of the sheer number of stories. But if you don’t like this story, there’ll be another one along in a minute…