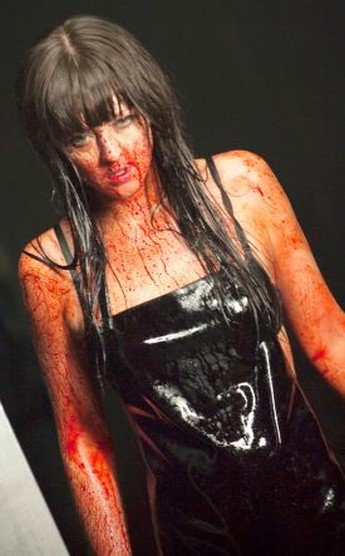 Medical student Mary Mason (Isabelle) is out of cash. She goes to a seedy strip-club, intending to make some quick cash that way, but her surgical skills end up being required. One of the strippers then hires her, as a friend has an unorthodox body modification request. From there, Mary becomes part of the medical underground, splitting tongues and doing changes to clients beyond the bounds of normal plastic surgery. After an unpleasant incident at a party, where she is drugged and raped, Mary takes a nasty, and extended revenge on her attacker, whom she kidnaps for a first-hand demonstration of her talent. That brings a dogged police officer on her trail and…

Oh, dear: never mind. So much promise, not least in Isabelle, who is a potentially fascinating character, up until the point when the story loses interest in anything that might be described as a storyline, and vanishes up its own surgically-enhanced anus, going from unconnected scene to unconnected scene. Is seeing some dude with a split tongue supposed to mean anything? Was it merely Tarantino-esque ego that made the directors give themselves extended cameos in roles that served little or no purpose? Why does a Seattle homicide cop have a British accent? [supposedly, it’s tribute to Clive Barker, except he hasn’t had a British accent for about 20 years] And what was the ending – and, by that, I mean about the last 30 minutes – about?

It is, frankly, a mess than unravels the further it goes on, and that’s a shame as it has undeniable potential early on. As well as Barker, there’s something of early Cronenberg here, with a feminist slant of chilling brutality, right up to the point of the kidnap. If the venom and spirit there had been extended for the rest of the film, this could have been a classic. Instead, what you have here is among the most self-destructive car-crashes of recent memory, and I found myself watching the clock, rather than the movie, by the end. I can’t help suspect the fanboy drooling over this one is largely the result of female twin directors, because there’s precious little evidence of talent beyond a concept. But as someone who feels absolutely no need for any body modification – not even a pierced ear – this left me entirely unmoved.