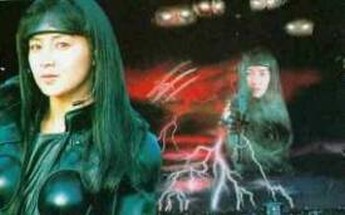 A Japanese take on the zombie pantheon, specifically Day of the Dead, with the military trying to turn reanimated corpses to their own nefarious aims. Of course, this being Japan, there’s a girl in a cool armoured suit standing between them and success – in this case, the girl is played by pro wrestler Suzuki [other monsters are also played by wrestlers Devil Masami, Kandori Shinobu and Eagle Sawai]. It’s clearly a low budget production, yet the director clearly has some talent, and the joins aren’t too visible. Nothing special or really excessive, but an interesting angle on an old idea.