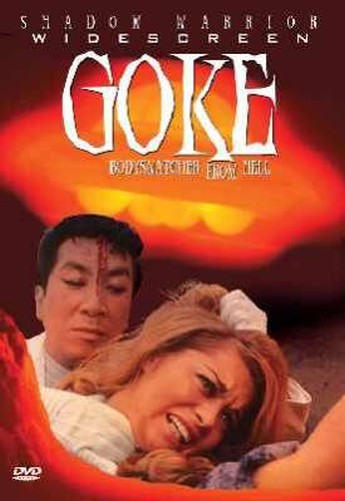 Despite a fabulous ending, you’ll be hard pushed to stay awake; this 1968 Japanese film feels like a Twilight Zone ep stretched far beyond its merits. An airliner encounters a UFO – the luridly-coloured sky was aped by Tarantino in Kill Bill – and crashes into the mountains, where the survivors are menaced by a vampiric parasite that takes over a passenger. All of which takes places against the background of imminent alien invasion. Unfortunately, the passengers and crew would shame Airport movie: no singing nun, but a corrupt politician, hijacker, brave co-pilot, psychiatrist, spunky stewardess, token ethnic character, etc. Though at least here, the last-named is an American, played by Kathy Horan. [Even in the original, she spoke English, which explains the sudden appearance of Japanese subtitles in the dubbed version.]

The acting doesn’t redeem the film either, and nor do the effects, save a couple of striking moments. Sato seems to be aiming for some kind of claustrophobic atmosphere, but rarely achieves any significant degree of tension. It’s only the finale – which, ironically, leaves the narrow confines of the downed plane far behind – that will stick in your mind, with the kind of bleakness rarely found in Western films. It thus stands as a counterpoint to Signs, an alien invasion movie almost ruined by a dreadful ending. This time, it’s a dull experience, almost saved by a great coda.