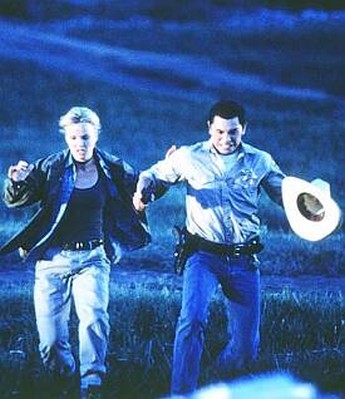 “The bats have left the bell-tower, the victims have been bled…” Military experiments lead to the release of the super-intelligent, carnivorous titular creatures, and only sherriff Phillips and scientist Meyer – the less-attractive one from Starship Troopers – can save the world. The plot struggles gamely to an extremely contrived ending which sees our heroes coming up with the idea of using a giant air-conditioning unit to freeze the beasties — it’s all every bit as dumb as it sounds.

However, despite this, and effects which are well below the standard I’d expect from KNB (the bats always look plastic or digital), it’s never actually dull, and wastes very little time before getting down to cheerful chiroptera carnage. Unfortunately, this is largely all that’s on offer, and there is a limit to how much high-pitched squeaking one can take. Eventually déja vu begins to bite, alongside the bats.