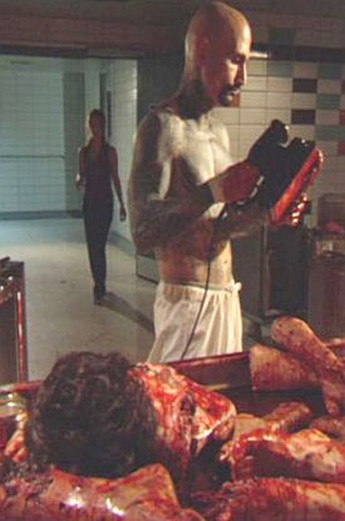 A group of college kids, visiting New Orleans for Mardi Gras, get into a car-crash on their way out of town, mowing down a patient from the nearby Mercy Hospital. The ambulancemen who arrive to take the patient back, convince the kids they need to get checked-up as a precaution. There, they hang out in the foyer with a weird receptionist (Jenette Goldstein – yes, Vasquez from Aliens, more than 20 years on. Seems her main job these days is her plus-sized LA bra store, with its slogan, “The alphabet starts at D”), and get called out, one by one, to see Dr. Benway (Patrick). S’funny how none of them ever come back from their consultation, isn’t it? You’d think someone would notice. Oh, I forgot – these are college kids in a horror movie, and as usual, this college apparently has pretty lax entrance requirements. Quicker than you can say, “No signal,” they’re being sliced and diced by Benway and his minions, providing a source of parts for him to use in his dubious work.

To get the good stuff out of the way, Gary Tunnicliffe’s effects are nicely handled, particularly with one set, which is like an extended version of the Viking “blood eagle” torture. If you’re not sure what I mean: innards – they’re not just for your insides any more… That aside, there’s not much to write home about here, just your usual collection of kids behaving nonsensically in a perilous situation. Lowndes is okay as the final girl, and the staff (barking mad, to a man or woman) are likely more entertaining to watch than the victims. It goes pretty much as you’d expect, with the two groups winnowing away each other’s numbers until the end. I’ve seen worse. I have, however, seen a lot better. We were, however, impressed by the way one student managed to cause an explosion with very non-flammable nitrous oxide, apparently just because he was told it was explosive by an orderly. Now, that’s the power of positive thinking.