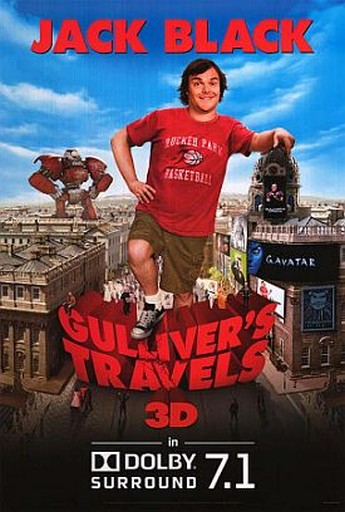 Jack Black is Jack Black, in a Jack Black movie. And if you like Jack Black doing the usual Jack Black things that Jack Black does, you’ll love this. You’ll definitely know what to expect if you’ve seen School of Rock. Or The Pick of Destiny. Or Be Kind Rewind. Or the majority of the Jack Black filmography, in which he plays a “bumbling, cocky, but internally self-conscious outsider” [thank you, Wikipedia]. Here, it’s Lemuel Gulliver, who lies his way to a travel writing assignment in the Bermuda triangle, only to wake up a giant in the land of Lilliput. There, he becomes the commander of the army, to the ire of the current incumbent (O’Dowd), helps the local princess (Blunt) with her love issues, and rescues his own crush (Peet) after she follows him to Lilliput.

However, if you’re expecting biting satire, you’re in entirely the wrong place – there’s a reason that Jonathan Swift’s name is nowhere to be found [not even an ‘additional dialogue’ credit, though the end titles are largely text from the original stories]. Instead, this is largely a blender into which bits of action, comedy and romance have been thrown, then turned into puree containing nothing into which a viewer can sink his teeth. As such, it’s certainly not terrible: O’Dowd, whom you should know from The IT Crowd is great, and there are enough familiar faces elsewhere, including a couple from Dr. Who to keep things ticking over, though they’re sadly underused.

Technically, it’s an impressive piece of work, with the oversized Gulliver seamlessly interacting with his minute companions, then finding the shoe on the other foot when he is exiled to the land of the giants, Brobdingnag. There are also fun concepts, such as Gulliver recycling everything from Star Wars to Titanic as how own life experiences, for the amusement of the Lilliputian royal family. However, Black’s comic mugging runs out of appeal considerably before the end, and from then on, it feels like being locked in a closet, with an excitable Golden Retriever that just swallowed a month’s supply of Red Bull.