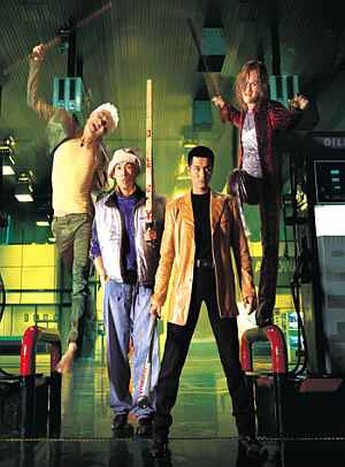 Four “disaffected Korean youths” (as the DVD sleeve puts it) return to re-rob the titular target, only to find not enough money to satisfy them this time. So they opt to run the joint instead, pumping petrol and keeping the money; snotty customers either get locked in car boots, or are kept captive alongside the owner and his workers. As time goes on, the natural order of things is destroyed, and trouble – in the form of cops, gangsters and a peeved delivery boy – approaches with the inevitability of a runaway tanker.

Don’t think I’ve laughed less at a comedy in a very long time; yet, I don’t think I’ve grinned more, either. This is dry, sarcastic film-making that manages to be straightforward and fun, in a pure “what next?” way. It is probably also taking pot-shots at society, but I can’t really comment, since all I know about Korean society, I learned from its movies – doubt My Wife is Gangster helps much in this regard. There are elements of Lord of the Flies, in the way the victims’ personalities mutate under pressure, but these never obstruct the cool stuff, like using petrol pumps in John Woo style.

The characters are shallow (given their number, perhaps understandably) and the flashbacks where we see what made the kids go bad are hardly convincing. It’s still enjoyably subversive: Lee, as the gang’s leader, is an excellent anti-hero, and the finale is happily free of Hollywood-style cop-out.