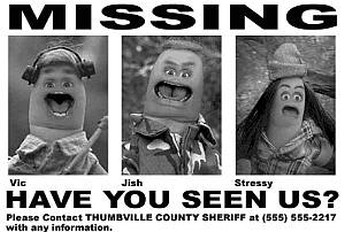 Of all the Blair Witch parodies, this one perhaps knows its limits best, not even attempting to reach feature-length. Indeed, it barely makes it to 25 minutes, though with the cast and crew interviews, and two commentaries (sane and insane) on the DVD, it does justify its $9.99 price tag. Yes, cast and crew interviews: this may seem bizarre, when you hear that this is one of Oedekerk’s ongoing series (see also, The Godthumb, Frankenthumb and Thumb Wars) in which he replaces all his actors with thumbs, but they actually work as devastating parodies of narcissist actors and directors.

As for the film itself, must say this is about as much of the central characters as I could take: whiny, self-obsessed idiots, all three of them, an element of the original I could likely have done without. Still, the flashes of surreal comic genius such as the shark attack make up for this accuracy, and the conceits of the original are devastating skewered with pointed comments about the strength of nylon. Though the most amusing thing on the entire DVD was likely the trailer for Thumbtanic, which says more in its two minutes than James Cameron managed in four bloated hours of watery nonsense.