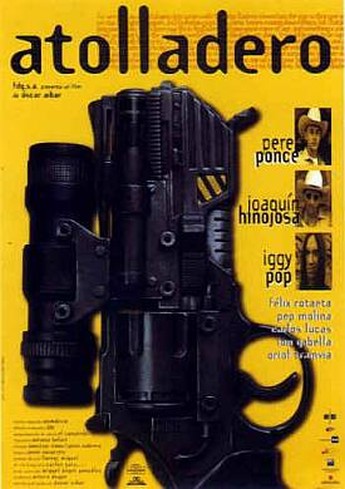 While possessing the feel of a spaghetti western, this is neither spaghetti (being Spanish) nor, indeed, a western, being nearer to SF and having more in common with Repo Man. Pere Ponce is in the Emilio Estevez role, a young and eager cop, partnered with a grizzled veteran in a town ruled by the Judge, a 150 years old, barely alive sexual deviant, with Iggy Pop as his bodyguard (while his role is much smaller than his credit on the sleeve suggests, it’s not surprising since he’s the only even vaguely recognisable name associated with the film).

This is unfailingly macho, in the way only the Spanish can be – virtually every female character is a whore – as the hero tries to escape to a better life and become a man. Though it starts briskly and finishes at high speed as well, the middle does lag, being largely a man-hunt with little tension or drama, and the SF elements seem tacked on without much thought and to little real effect. Still, the wild, savage swipes at authority and religion are entertaining, and it’s a genre-kebab not without charm.